Bedard sparks rally as Canada eliminates US at world juniors 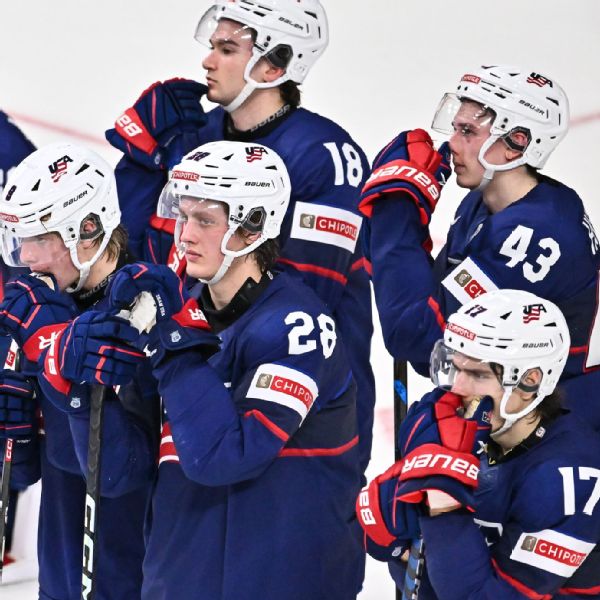 HALIFAX, Nova Scotia — Connor Bedard scored in the second period, igniting a rally and electrifying a hungry home crowd, as Canada defeated the United States 6-2 in the semifinals of the world junior championship Wednesday.

Team Canada will play host to the Czech Republic in the tournament’s title game on Thursday.

Bedard, 17, the tournament’s leading scorer and the likely No. 1 overall pick in this year’s NHL draft, scored at 11:49 of the second period, with assists from Ethan Del Mastro and Joshua Roy, cutting a 2-0 Team USA lead in half and turning the momentum over to the hosts.

Logan Stankoven, Adam Fantilli and Roy also scored as Team Canada swarmed American goaltender Trey Augustine in the second period. In an 11-minute span of the stanza, Team USA went from up 2–0 to trailing 4–2. In the third period, Brandt Clarke scored to push Canada’s lead to 5–2, before Roy added an empty-net tally.

Logan Cooley, who plays for the Minnesota Golden Gophers and is a first-round pick of the Arizona Coyotes, scored for the Americans in the first period, followed by a goal from Kenny Connors, a fourth-round selection of the Los Angeles Kings and a forward for the UMass Minutemen.

“I thought we played really well at times,” said Team USA coach Rand Pecknold. “But we just couldn’t put it together for 60 [minutes],

Thomas Milic shook off those two early goals to make 43 saves for the Canadians en route to the win.

“I love those high-pressure situations,” Milic said. “As we progress through the tournament here, it’s just getting better and better.”

Augustine, 17, who committed to play for the Michigan State Spartans, finished with 31 saves for the Americans.

“He was great. We hung him out to dry pretty good,” Team USA coach Rand Pecknold said of Augustine. “I thought he played excellent. On some of the goals, he doesn’t have a chance. We have to do a better job in front of him.”

The rivalry game was a rematch of the 2021 world junior final, in which Anaheim Ducks star Trevor Zegras led a Team USA victory.

Canada, which won last year’s title in August, now awaits the Czech Republic, which mounted a rally of its own Wednesday. David Jiricek tied it with 39 seconds left in regulation, and Jiri Kulich scored late in overtime to stun Sweden 2–1 in the other semifinal.

The Czechs reached the final for the first time since winning back-to-back titles in 2000 and 2001, and avoided a shootout, when Kulich, a first-round pick of the Buffalo Sabres, cut from the right side to the slot and lifted the puck over goalie Carl Lindbom’s right shoulder with 50 seconds left in the 10-minute extra period.

Team USA, which had two goals overturned for goaltender interference against Canada, will play Sweden for the bronze medal on Thursday.

“It’s really important to go home with a medal,” said Team USA captain Luke Hughes, who plays for the Michigan Wolverines and is a first-round pick of the New Jersey Devils. “We have to wrap our heads around that and play better tomorrow than we did tonight.”

UK weather: 2022 was the warmest year ever, Met Office confirms