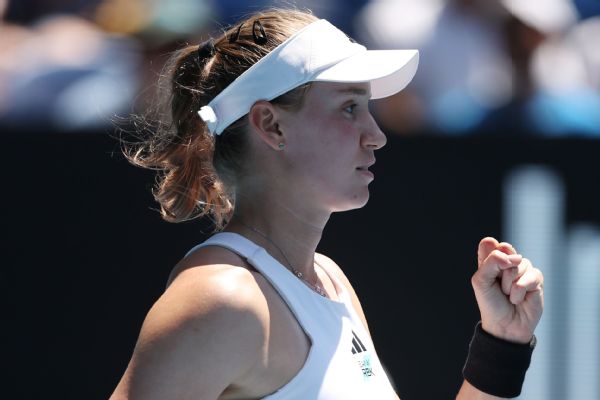 It all came so seemingly easy for Iga Swiatek last season: two Grand Slam trophies, eight titles overall, a 37-match winning streak, a lengthy stay at No. 1 in the rankings.

Those accomplishments made everyone else expect constant greatness from Swiatek, which she can’t do anything about. They also changed the way she approached big moments, and a 6-4, 6-4 loss to Wimbledon champion Elena Rybakina in the Australian Open’s fourth round Sunday made Swiatek wonder whether she needs to reassess her outlook.

“I felt like I took a step back in terms of how I approach these tournaments, and I maybe wanted it a little bit too hard,” she said. “So I’m going to try to chill out a little bit more. I felt the pressure, and I felt that ‘I don’t want to lose’ instead of ‘I want to win.'”

So there will not be a showdown between Swiatek and No. 7 seed Coco Gauff in the quarterfinals at Melbourne Park. Instead, it will be Rybakina taking on 2017 French Open champion Jelena Ostapenko, a 7-5, 6-3 winner against Gauff, with a semifinal berth at stake.

“I kept her under so much pressure,” Ostapenko said.

Add Swiatek’s loss to Week 1 exits by Ons Jabeur, Rafael Nadal and Casper Ruud, and this Australian Open marks the first Grand Slam tournament in the Open era — which began in 1968 — with the top two women’s seeds and top two men’s seeds all gone before the quarterfinals.

In other women’s action Sunday, No. 3 Jessica Pegula got to the quarterfinals in Australia for the third year in a row by defeating 2021 French Open champion Barbora Krejcikova 7-5, 6-2, and awaited the winner of the night match between two-time Australian Open champion Victoria Azarenka and Unseeded Zhu Lin.

Both the 22nd-seeded Rybakina, a 23-year-old who represents Kazakhstan, and the 17th-seeded Ostapenko, a 25-year-old from Latvia, made it this far in Australia for the first time.

“There was moments in the match where I was getting frustrated, because I normally can problem solve, but today I feel like I didn’t have much answers to what she was doing,” said Gauff, an 18-year-old from Florida who was the runner-up to Swiatek at the French Open last June.

“There was balls I was hitting deep, and she was hitting them on the line and hitting them back deep, over and over again,” said Gauff, who wiped away tears during her news conference. “It’s just one of those days that just didn’t go my way and went her way.”

One key: Ostapenko went 3-for-3 converting her break chances, and Gauff was just 1-for-8 in such situations.

Rybakina, meanwhile, used her big serve to produce a half-dozen aces, part of an overall 24-15 edge in total winners against Swiatek.

Until Sunday, both Swiatek and Gauff looked fairly dominant for a week, winning every set they contested. Swiatek dropped a total of just 15 games, Gauff just 19, through three matches.

“For sure, when you play against No. 1, I think you really have nothing to lose,” Rybakina said. “I knew that I had to be aggressive from the first ball because she’s a great mover, and she defends really well. So I was trying to just attack her from the first ball, and it really worked well.”

Rybakina’s ranking of No. 25 does not properly reflect her ability or results because her championship at the All England Club in July did not come with any ranking points. The WTA and ATP tours withheld all points at Wimbledon in 2022 after the All England Club barred players from Russia and Belarus from participating because of the invasion of Ukraine.

Rybakina — who was born in Moscow but has played for Kazakhstan since 2018, when the country offered her funding to support her tennis career — said her current standing “doesn’t bother me, because it’s already been six months,” yet also acknowledged it does provide some motivation.

Despite her status as a major champion, Rybakina has been out of the spotlight: Her first-round match at Melbourne Park was placed on tiny Court 13 last Monday, and her match against two-time Slam champ Garbiñe Muguruza at least year’s US Open was on court 4.

But her game is worthy of much more attention, as she displayed in knocking out Swiatek, one match after defeating 2022 Australian Open runner-up Danielle Collins.

Swiatek was not at her best, and Rybakina had a lot to do with that. In the opening game, Swiatek led 40-love but got broken. In the next, Swiatek held two break points at 15-40 but failed to convert either. So early on, while it ended up being 2-2, it very well could have been 4-0 in Swiatek’s favor, and she termed that sequence “a little bit disturbing.”

Rybakina wound up serving out that set at love, capping it with a 113 mph (183 kph) ace, and her dangerous backhand was quite a help, too: She produced six winners off that wing in the first set, compared with zero for Swiatek. .

In the second set, Swiatek appeared to have gotten herself back on track, going up 3–0. But that surge didn’t last long, and Rybakina took six of the match’s last seven games.

CPR and Defibrillators: What You Need to Know