For the second time in two seasons, Rutgers stunned No. 1 Purdue 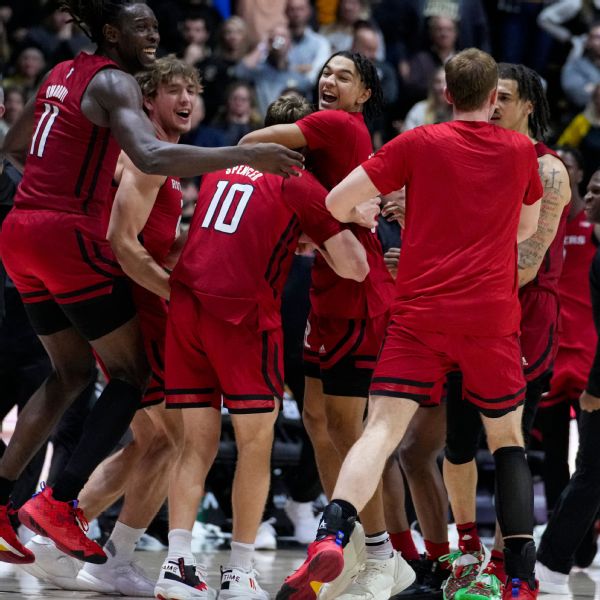 WEST LAFAYETTE, Ind. — Cam Spencer’s 3-pointer with 13.3 seconds left gave Rutgers the lead, and No. 1 Purdue failed to convert on its final two chances Monday night as the Scarlet Knights held on for a shocking 65-64 road victory.

It’s the second straight season coach Steve Pikiell’s team has upset top-ranked Purdue. Last season, the Scarlet Knights needed a half-court buzzer-beater on their home court to pull off the school’s first win over a No. 1-ranked team.

“You need everybody on the roster to win a game like this on the road,” Pikiell said. “And everybody was ready to chip in.”

Spencer finished with 14 points while Paul Mulcahy had 16 points, 8 rebounds and 6 assists.

“We know what’s coming. What Rutgers did tonight didn’t shock us,” Purdue coach Matt Painter said. “If we were going to war, we’d stop by New Jersey and pick them up.”

The Boilermakers (13-1, 2-1) were led by Zach Edey, who overcame early foul trouble to finish with 19 points and 10 rebounds. It just wasn’t enough to close out an incredible second-half rally from a 10-point deficit. New Mexico is now the last remaining unbeaten team in Division I.

“You want them to be physically and mentally tougher than they were,” Painter said of his team. “Then, clean up the sloppiness.”

Rutgers controlled the game most of the night, taking a 34–24 halftime lead and fending off the Boilermakers as they charged back. Purdue tied the score at 52, then finally took the lead on Brandon Newman’s tiebreaking 3-pointer with 4:45 to play.

Mulcahy answered with the Scarlet Knights’ next 10 points, which gave Rutgers a 62–57 lead with 2:22 to play. Purdue answered with four straight to make it 62–61, and when Mulcahy missed a short jumper with 54 seconds to go, Edey grabbed the rebound, Purdue called timeout and freshman Fletcher Loyer made the go-ahead 3 with 29.8 seconds left.

But Spencer made his 3 after another timeout, then watched Newman miss a 3. And after Rutgers turned it over on an inbounds play with 0.4 seconds to go, the Boilermakers couldn’t get the ball to Edey for a final shot.

“He played well the entire game, and he’s not just a shooter,” Pikiell said of Spencer. “He leads the league in steals and he does a lot for us. At the end, he’s like, ‘I’m making that.’ He’s a very confident kid.”

The Scarlet Knights, in the Pikiell era, have defeated 14 ranked opponents, upset a No. 1 team for the first time in school history and now they’ve done it again. Rutgers appears headed for a school-record third straight NCAA tournament.

“We’re three games into the best league in the country,” Pikiell said. “We’re good, but it’s a long, long season.”

“This league is tough,” he said. “Every team poses different problems.”