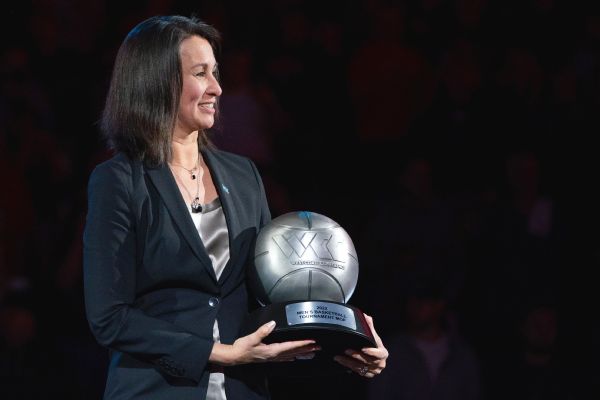 The Mountain West hired Gloria Nevarez, who has been leading the West Coast Conference for the past five years, to be its next commissioner on Friday.

Nevarez, 51, has led the WCC, home to Gonzaga and one of the top mid-major basketball leagues, since 2018. During her tenure, the conference expanded its national television contracts and added a long-term title sponsor for the men’s and women’s To install basketball tournaments.

The WCC also adopted the groundbreaking Russell Rule in July 2020, requiring all its schools to include a member of a traditionally underrepresented community in the final candidate pool for every athletic director, senior administrator, head coach and full-time assistant coaching search.

“While we are excited for the opportunity this provides her, our Conference will miss the tremendous leadership and stewardship Gloria has demonstrated in her time as our Commissioner,” Thayne McCulloh, Gonzaga president and chair of the WCC presidents’ council, said in a statement .

Nevarez has also been active at the NCAA level, currently as a member of the Division I Transformation Committee, which is working on reforming issues such as membership standards and access to championship events.

She enters the 12-school Mountain West at time when conference realignment at the upper parts of Division I seems to be slowing but might not be done.

The Pac-12 is still working on its next moves after the summer announcements that USC and UCLA will join the Big Ten in 2025. Mountain West member San Diego State has been mentioned as the most likely target for the Pac-12 if it does choose. to grow.

“I think it’s incumbent upon me to keep open communication with all the members of the Mountain West Conference and also keep an eye on the horizon and the pulse of what’s going on and constantly convene our membership to be talking about and thinking about membership, even if we are not under threat of losing a school,” Nevarez said.

Before taking over at the WCC, Nevarez spent about eight years at the Pac-12 as senior associate commissioner. She oversaw all conference sports and championships except football during that time and served as the conference liaison for men’s basketball and director of the men’s basketball tournament in Las Vegas.

The Mountain West has also played its men’s and women’s basketball tournaments in Las Vegas in recent years. The conference has 12 teams in the Mountain and Pacific time zones, plus Hawaii.

Nevarez, a former basketball player at Massachusetts who is from Santa Clara, California, began her career in college sports at Mountain West school San Jose State as director of compliance. She earned a law degree at the University of California, Berkeley.

She also had stints as an administrator at California and Oklahoma.

Nevarez is coming from a conference that did not sponsor football, but she noted most of her career was spent at schools and conferences where football is the top revenue-driving sport.

“There isn’t a piece of big football that I haven’t worked with and around. And as you know, it powers the association. And so, for me, this is a great opportunity,” Nevarez said. “I attended large, public state institutions: high school, college, law school. I worked the majority of my career with like institutions, and I’m really excited to get back to my roots in large public institutions and football-sponsoring institutions. “

At COP27, Biden Casts America as Climate Leader, While Activists Push Him to Do More