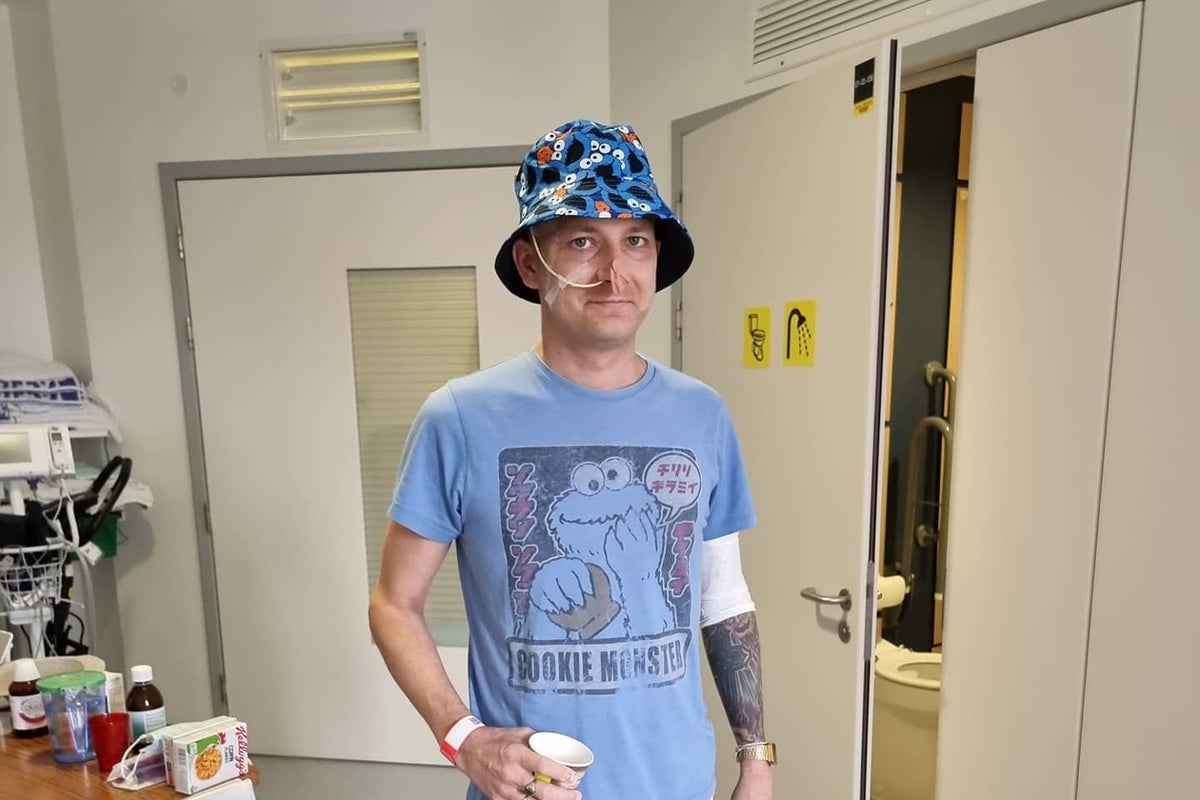 A former calibration engineer, who was told just days before Christmas his leukemia is terminal and given months to live, organized his own “living funeral” to give him the “chance to say goodbye” to his friends and loved ones before he dies.

Rob Hale, 33, who lives in Thornbury, South Gloucestershire, said he has known for nearly two years that he will die of leukemia – cancer of the white blood cells – but he did not receive the terminal prognosis until December 2022, which was “ devastating”.

After doctors told him his remaining lifespan would be measured in “weeks to months, rather than months to years”, Rob came up with the idea of ​​having a “living funeral” at Cattle Country Farm Park, in Berkeley, Gloucestershire, to bring his friends and family together.

The event featured a buffet, games for children, a table with photos, and a guest book where people could write fond memories of their time with Rob.

Rob said the occasion was “better than (he) could have hoped for”, and at one point, he even went down the “death slide” at the park – a slide with a vertical drop – and was met with applause and cheers from a crowd of more than 50 people as he reached the bottom.

“I’ve only been to a few funerals in my life, and they’re all really sad, sombre; (everyone is) dressed in black, heads bowed,” Rob said.

“I knew that, at some point, I’m going to have that funeral, but I also knew that a lot of the people that might attend it, I probably won’t get to see before I actually die.

“I wanted to do something where I could see them all, I could speak to them, catch up with them, (and) have an actual chance to say goodbye to them.”

Rob, who worked for an aerospace manufacturer for more than 15 years, was diagnosed with leukemia in April 2021 after contracting Covid-19 in February.

Rob believed his symptoms – which included night sweats, extreme exhaustion, and fevers – were associated with long Covid, but it was not until he received a phone call from Bristol Royal Infirmary on April 23 while he was at work that he was diagnosed with acute myeloid leukemia.

“My mind just started racing; I didn’t really absorb what they were telling me,” he said.

“When the phone call finished, I remember I just hunched over the machine I was (working) on ​​and just started crying.

“After about five minutes, one of the guys that I worked with popped his head into the room I was working in, and he said, ‘is everything alright, Rob?’

“I don’t even know how I said it, because it’s even difficult to say it now, but I just said, ‘no, I’ve just been told I’ve got leukaemia’.”

Rob told his parents later that day, but he did not tell his sister until a few days later, as she was due to give birth “at any moment” and he did not want to “give her any stress”.

While Rob describes himself as typically being “humorous” and “silly”, he said it was difficult to be “light-hearted” in the days that followed.

“There were lots of tears; it was the last thing they expected,” he said.

“They knew I had Covid, and they knew I was struggling, but they didn’t realize the severity of it.

“I guess finding out that your first child has got leukemia is quite a devastating thing to hear, but because I was trying my best to keep a brave face, they did the same.”

Approximately 10 days after his diagnosis, Rob was admitted to Bristol Royal Infirmary.

He said he was “very close to dying”, as the blast cells in his blood – abnormal white blood cells – measured 95% at the time.

He remained at the hospital for the next four months, undergoing blood tests, scans, and electrocardiograms (ECGs), and he was fitted with a peripherally inserted central catheter, known as a PICC line, which allowed doctors to access the large central veins near his heart.

Rob had multiple rounds of chemotherapy, along with eight sessions of total body radiotherapy, and a stem cell transplant.

Rob said the first round of chemotherapy was manageable, with minor side effects, but the second round was extremely difficult, and he remembers one day in particular where he was scratching his face and clumps of hair from his beard came out in his hands.

He said it took him 80 days to recover from the second round of chemotherapy, and during this time, he picked up some “horrible infections” and was fed through a tube for six weeks.

Doctors also discovered the cancer had spread to his central nervous system and, at this point, Rob’s parents were called in to spend the night with him, as they thought he would not make it.

“They all thought, at that point, that it had spread to my brain and that I basically only had a couple of days left to live,” he said.

“So my parents were told, ‘you can come and stay overnight with him till he goes’.”

Incredibly, despite doctors’ fears, Rob survived, and he later stayed in a nearby accommodation block with his parents for around 60 days before going home.

He had to return to hospital regularly for check-ups and almost weekly blood transfusions in the months that followed, but Rob then started to notice lumps had formed on his testicles.

After an ultrasound, Rob was told on December 16 that the cancer had returned and his leukemia was terminal, as it had spread to his blood.

Rob said he was “devastated”, but the news “was not a shock” to him, adding: “I’ve known for the last two years almost.

“I’d come to accept that I was going to die of leukemia, and that all I went through for the past two years has been prolonging it and buying more time.

“I should have died back in May 2021, but the fact I’m still here, it makes it worthwhile that I’ve gone through everything to have that extra time.”

Rob explained that one of the main things that helped him get through his “darkest times” was social media.

He set up an Instagram account while he was in hospital, which now has more than 1,000 followers, to provide personal updates on his progress and help “other people around the world” who have leukaemia.

He also started writing a bucket list of all of the places he wants to visit before he dies – specifically, castles – and he later created a fundraising page to help pay for any travel or accommodation costs.

Rob explained that he has “always been fascinated with history” and “castles had always stood out more than stately homes” during his childhood, so he is planning to visit as many castles as possible before he dies, with Tintagel Castle in Cornwall currently topping list.

He has already visited Corfe Castle in Dorset, as his friends planned a surprise trip for him on January 7, which he said was “absolutely brilliant”.

They all dressed up in knight costumes, and Rob said it was amazing to see his friends participate in something that meant so much to him.

The “living funeral” was held a week later on January 14, and Rob said everyone was “laughing” and “having fun”.

Rob is now taking “each day as it comes” and is hopeful he will “reach the end of April for his niece’s second birthday”, but he is so grateful for the love and support he received that day.

He said: “Everyone was really thanking me for putting something on that brought everyone together like that.

“They said, if somebody had tried to book a reunion now, nobody would really bother with it, but because of the sad circumstances, it just brought everyone together that otherwise would never have crossed paths again.”

Alec Baldwin to be charged in fatal 2021 “Rust” shooting

Alec Baldwin to be charged in fatal 2021 "Rust" shooting