Cost of living: How to cope with rising bills 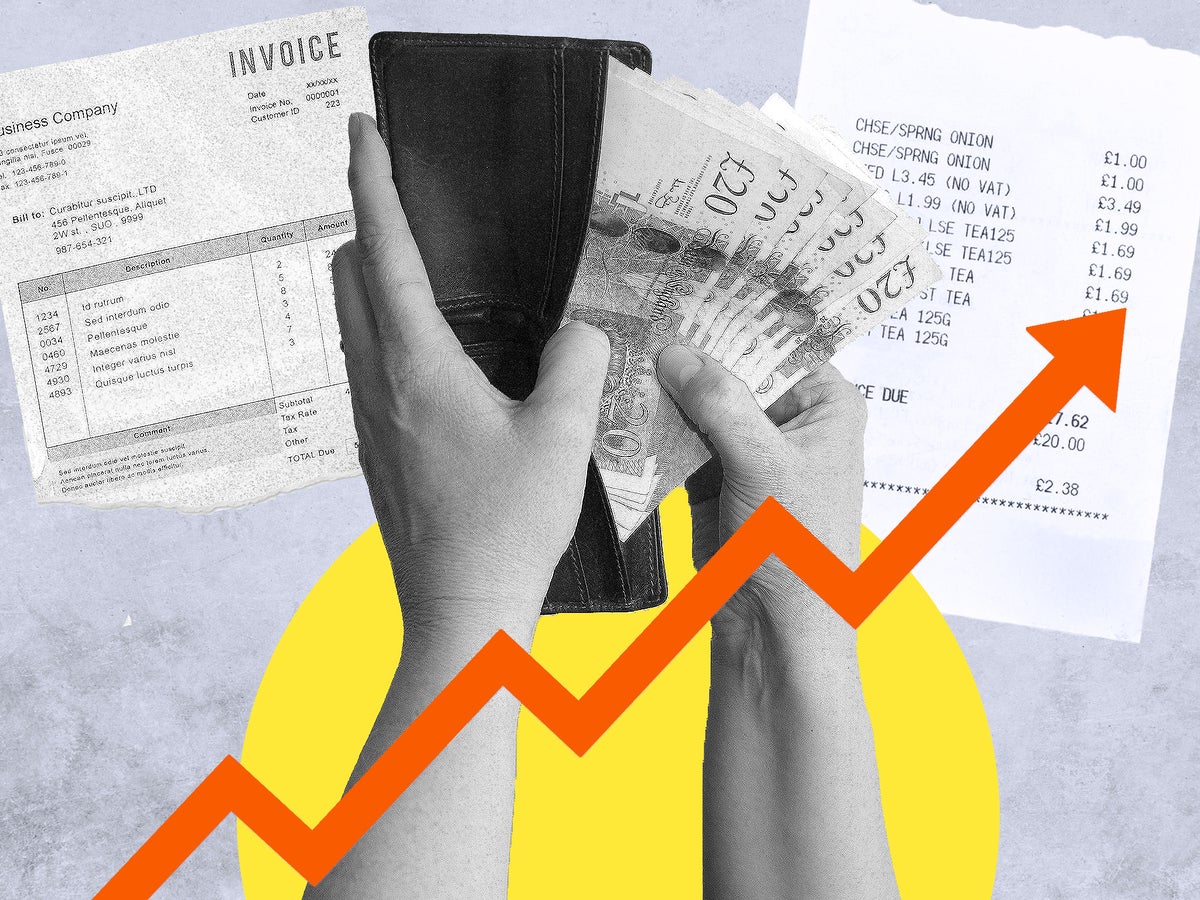 It feels like Britons have jumped out of the pan, only to fall straight into the fire as a major cost of living crisis grips the nation just as Covid-19 appeared to have abated.

With the average cost of a full tank of petrol exceeding £100 for the first time this year and totals at the till creeping up with each weekly shop, millions of people have faced an “eat or heat” choice – forced to choose between giving up a meal or heating their home.

According to the Office for National Statistics (ONS), around nine in 10 (87 per cent) of adults in Britain have reported their cost of living increased in March alone, with rising energy prices fueling the surge. The wholesale price of gas in January 2022 was almost four times higher than in early 2021, with limited stocks of natural gas and supply problems driving the prices of gas up globally.

It doesn’t stop there, as the energy price cap rose even further by 54 per cent from 1 April 2022, which is expected to add £693 per year to the average household bill. Ofgem chief Jonathan Brearley has said that the price cap, which was intended to prevent households from being ripped off by energy companies, is set to rise even higher in October.

In addition, inflation has risen to a new 40-year high, reaching 9.5 per cent last month. It comes after policymaker Michael Saunders, of the Monetary Policy Committee, warned that the UK’s rate of inflation may exceed the Bank of England’s (BoE) forecasts of just over 10 per cent. The ONS also revealed that British workers saw regular pay drop in real terms by the largest rate on record.

With the cost of everything increasing, debt charity StepChange has warned that more people will fall into debt as they struggle to pay bills and other commitments. The organization said on 3 February that “cost of living pressures” entered the top five reasons for debt among people turning to it for help in November 202 and has remained there since.

So how can people cope with rising costs and what help is available?

How worried should you be about the rising cost of living?

It’s easy to feel panicky and overwhelmed by the headlines right now, which are saturated by the cost of living crisis. It is a serious issue and heralds a “concerning time for many households”, Nick Hill, money expert at the Money and Pensions Service (MAPS), tells The Independent,

“One in three [households] say thinking about their financial situation makes them feel worried and nearly half admit they don’t feel confident in managing their money day to day,” he says.

“While we can’t ignore the challenges people are facing, it’s important to remember you are not alone. It’s normal to experience money worries, but it’s better to face them rather than ignore them.”

However, if you are experiencing feelings of anxiety and panic because of the news, it could be helpful for you to turn off the news and focus on your own financial situation. You may find that you’re not in as much trouble as you think you are, says Jasmine Birtles of MoneyMagpie.

Birtles, who founded the financial advice website, tells The Independent: “We have had a lot of people get in touch with MoneyMagpie panicking about the state of things, understandable. It could be genuinely helpful to switch off the TV, take a deep breath, and take a look at your own circumstances because it’s quite possible that they’re not as bad as has been suggested.”

Where should I start to manage my finances?

Both Hill and finance coach Bola Sol recommend people start learning how to budget in order to manage their money better.

Sol, who authored How To Save Ita guide to fixing finances, tells The Independent: “I would always say to start with budgeting. At this point, manual budgets – like spreadsheets or using notes on your phone – are not enough.

“Use an app that’s linked to your bank account so that you are constantly tracking your money and can see clearly what’s coming in and what’s going out. Apps like Emma will show you where some bills have gone up and comparisons of where you can get cheaper services.

“Once you understand your spending, you can re-prioritise things. Maybe push back on buying lunches, or reduce buying takeaways to twice a week, for example.”

Hill adds: “It doesn’t have to be hard to get started [on budgeting] – there are plenty of free budgeting tools available online, like the MoneyHelper Budget Planner, which will help you understand exactly where your money is being spent, and how much you’ve got coming in.”

Constantly reviewing your budget is one of the most “essential” things you can do to make an impact on your savings. Incoming and outgoing transactions fluctuate depending on our needs, so it’s good to stay on top of them, Hill says.

“Checking your direct debits and standing orders will allow you to spot where you might be able to cut back on costs. If you’re not using a particular subscription, check if there are any exit penalties and cancel where you can.

“If your financial situation allows you to, you could even put that money towards your savings each month – every little bit helps.”

What areas can I cut back my spending?

Now is a good time to check with your suppliers to ensure you’re getting the best deal you can get. While it’s not possible to get a cheaper deal on gas and electricity at the moment due to the price cap, you could still save on your current broadband and phone deal.

“You should call your current [broadband and phone] supplier in the first instance – they may be able to provide you with a better price if you’re considering leaving,” Hill says.

Another area you can make savings in is your grocery, Sol adds.

“Now more than ever is the best time to become really savvy with what you’re spending on,” she says. “Keep tabs on supermarket prices and stay on top of your comparison game. For example, check the prices of the same item in a large supermarket and in the corner store versions – most of the time, they will be cheaper in the large supermarket.

“You can also get really good deals on household items at super saving stores, like B&M, where they sell discounted cleaning products or multipacks of body wash. These are the types of small decisions that add up.”

Sol also advises that people sign up for any available rewards schemes to make the most of their money.

“If you shop at Tesco, make sure you have a Clubcard, get a Nando’s card if you’re having dinner with your mates. You can get points with M&S Rewards whenever you shop there, and Sainsbury’s has its Nectar card. Just make sure you’re getting as many of the rewards as possible.”

How can I get things for free?

The best way to save money is not to spend it, but it can feel extremely restrictive when you can’t participate in society because you can’t afford to. However, there are a number of things you can do or get for free, if you’re savvy about it – and if you’re willing to share.

“There is enough for everybody so long as we share and are helping each other,” she says. “What we have to do more of now is get together with our neighbors, families, and friends and see what we can share and how much we can support one another,” Birtles says.

Birtles recommends apps such as OLIO, where communities and neighbors can share food or other items with each other to cut down on waste. She also recommends using anti-poverty charity Turn2Us’ grant search function, which provides information on charitable grants that do not have to be paid back.

“There are thousands of grant-making bodies around the country that will give money to people in certain circumstances, it’s just a matter of looking for them and checking if you are eligible,” she says.

“Your local council can also potentially help you with a one-off grant from local charities or agencies. If you let your local council know you are struggling, they can put you in touch with them.”

What should I do about debt?

If you find yourself about to fall into debt, or that your previously manageable debts are now becoming overwhelming, you should act quickly.

According to StepChange, which provides debt advice, there are a number of ways you can start managing your debt beyond budgeting, including bringing in extra income.

“If you’re operating on a reduced income, or if the price of your regular outgoings has gone up, you may find that even after budgeting you need slightly more to cover any debts you have,” a spokesperson for the charity tells The Independent,

“In these cases, bringing in a little extra money can be essential, and it can be easier than it sounds.

“There are plenty of ways to make a few extra pounds, like using cashback websites or selling unwanted goods on online – StepChange’s website is full of ideas. If you’re in receipt of benefits, remember that any additional income may affect the amount you’re entitled to.”

You should also try to “avoid any credit where you can’t predict with a good amount of certainty whether you’ll be able to pay it back at the end of the month”, in case your income takes a sudden hit.

“Instead, we’d recommend considering if any purchases can wait until you’ve got the money in hand, instead of using services like Buy Now, Pay Later. If you must use credit, try to only use it where you’re certain that you can pay it off by the date it’s due.”

If you are still struggling and find yourself with a negative budget or with arrears on any priority household bills, don’t hesitate to get in touch with a debt advice organisation.

The spokesperson for Stepchange says: “Many people who come to StepChange struggle alone for months or even years, then tell us they wish they had contacted us sooner.

“Financial shocks like illness or unemployment, rather than overspending, are the most typical causes of debt. But whatever the reason, the experience of being in debt is stressful. That’s why it’s important to know that help is available, online, 24/7, from StepChange. Don’t let the worry of debt take over your life – taking that first step could make all the difference.”

If you’re struggling with your financial situation or debt, you can get in touch with StepChange or any of the charities and groups mentioned above. StepChange offers debt advice onlineor you can call them at 0800 1381111 from Monday to Friday, 8am to 8pm, and Saturday, 8am to 4pm.