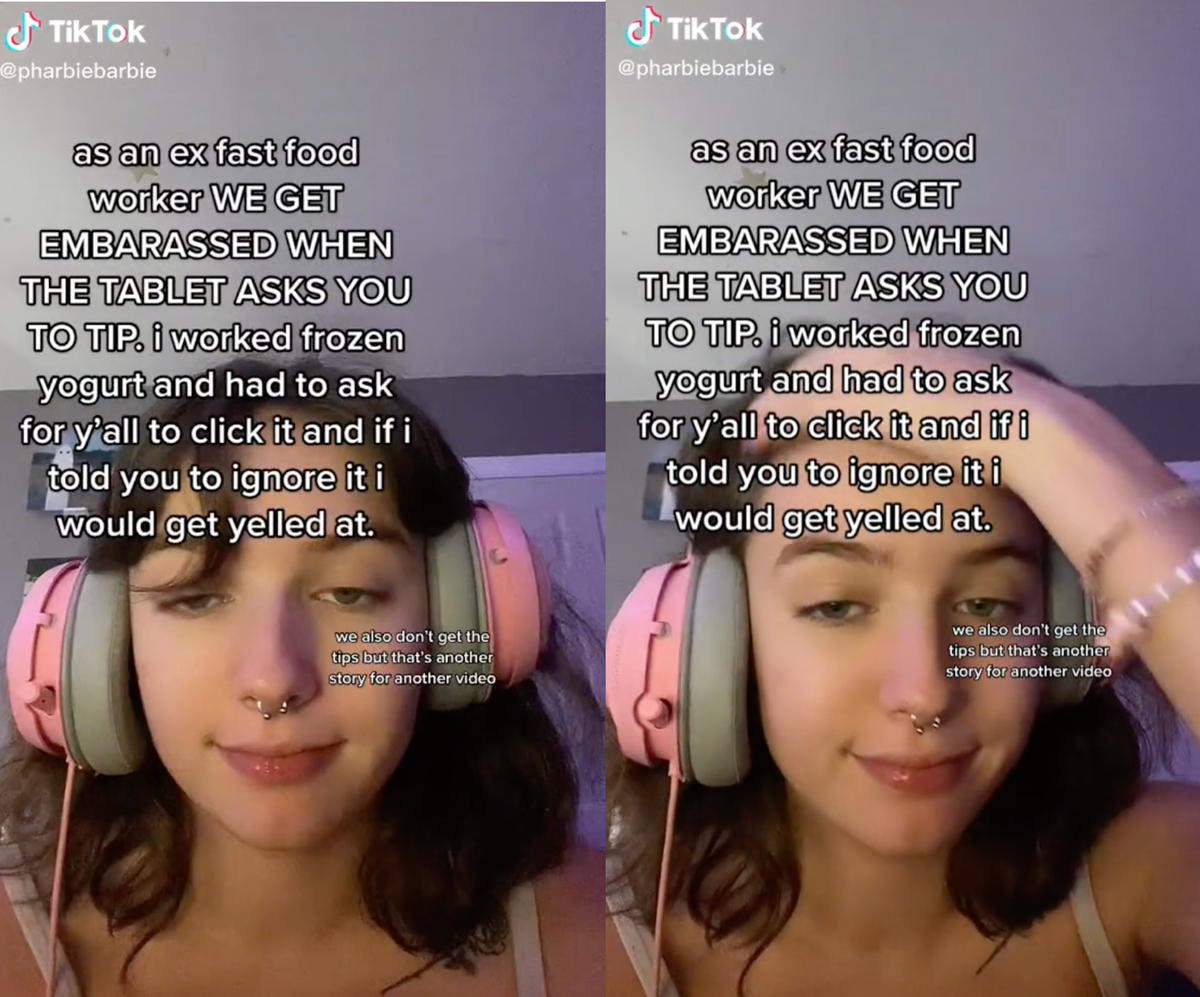 A former fast food employee has sparked a debate about tipping after claiming she felt “embarrassed” when the check-out tablets would ask customers how much they wanted to tip.

In a video posted to TikTok earlier this month, Allison, @pharbiebarbie, explained that she used to work the cash register at a frozen yoghurt shop.

However, according to Allison, she wasn’t a fan of the check-out tablets used at her workplace, as she found out embarrassing that they asked customers to tip. Check-out tablets or iPads have become increasingly common in the last few years, prompting many to share their annoyance with the prompts to add tips on the devices.

“As an ex fast food worker, WE GET EMBARRASSED WHEN THE TABLETS ASK YOU TO TIP,” the TikToker wrote in the text of the video. “I worked [at a] frozen yogurt [place] and had to ask for y’all to click it, and if I told you to ignore it, I would get yelled at.”

In the comments, Allison added that she thought it was odd when a customer did tip her, as she worked at a self-service yoghurt place.

“The funniest thing is that about 90 per cent of the time people would tip,” she wrote. “Like you put your yogahurt in a cup. I’m just the cash lady.”

As of 29 July, the video has more than 271,300 views, with TikTok users in the comments agreeing with Allison and claiming that, in some situations, customers shouldn’t have to leave a tip.

“It’s always [at] the weirdest job too,” one person claimed. “Like all you did was put my cookies in a box. Why would I tip you 20 per cent.”

“At this point I just reach over and push no tip,” wrote another. “Asking old people to use the system is a headache.”

A third person added: “I JUST got confronted at my job for NOT making tips like boo maybe it’s because I spin an iPad around after charging $5 for a cupcake.”

Other people who claimed to have worked at fast food restaurants revealed that customers became upset when they were asked to tip.

“And people are so freaking mean about it,” one viewer wrote. “Trust me we’re not happy about it either, we’re just doing our jobs. No need to be rude or make fun of us.”

However, some viewers expressed the importance of tipping all fast-food workers, even those who work at the register.

“Lol and I tip 20 per cent every time,” one person wrote, while another said: “I always just politely ask them to just click no tip to finish the transaction. Nine out of 10 times they tip anyway.”

This isn’t the first time that a debate about tipping culture has gone viral. Earlier this month, TikToker @aubreygracep, Aubrey, posted a video about the “awkward pressure” to tip, where she did a reenactment of a barista asking a customer to tip through an iPad screen presented at check-out.

In response to the video, some viewers noted how uncomfortable it is to “not leave a tip,” while others argued that baristas rely on tips in order to “earn a living wage”.

Shakira to go to trial in Spain for alleged tax fraud

Daryl McCormack Has More Than Luck on His Side

Daryl McCormack Has More Than Luck on His Side