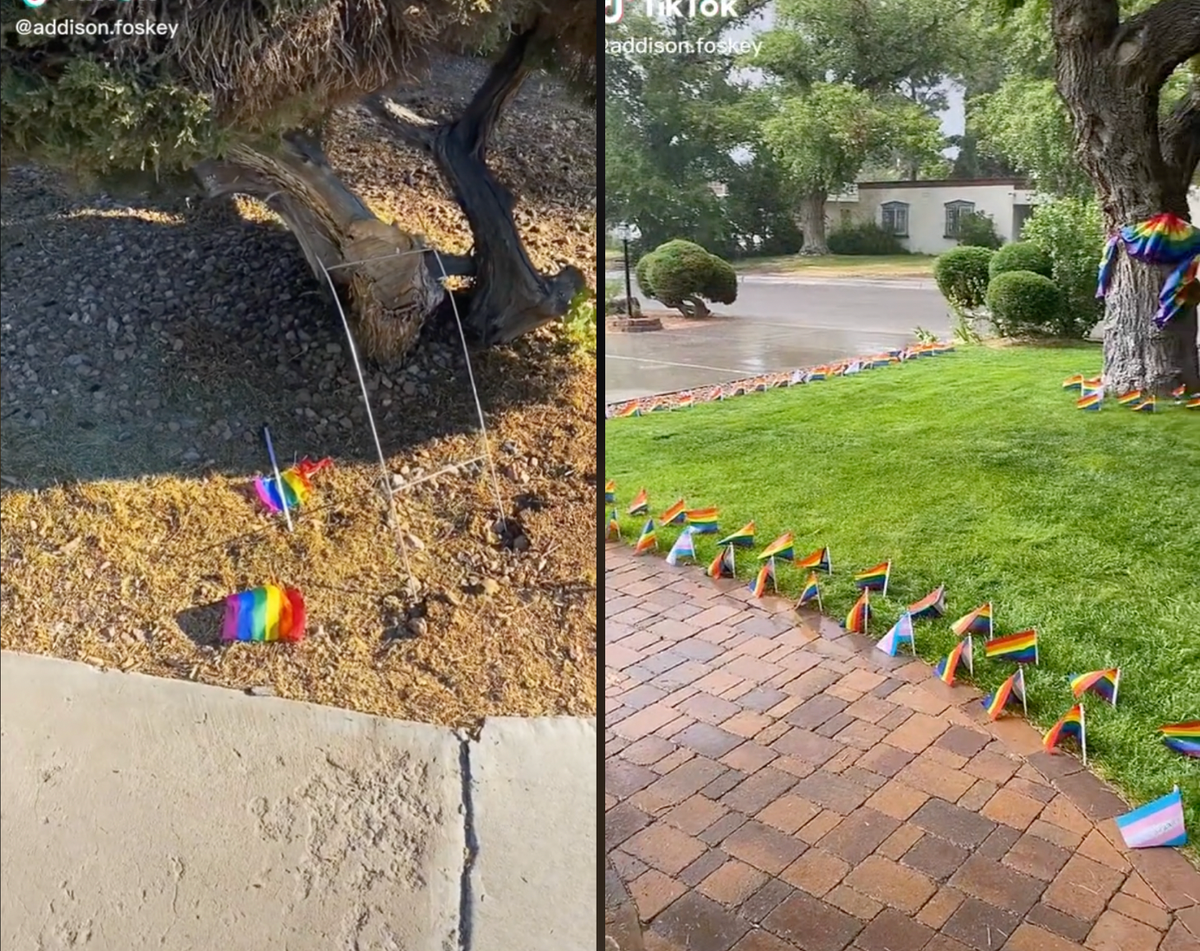 A man had a perfect response to someone tearing up his pride flag and stealing his human rights sign: He covered his entire home with LGBTQ+ decor.

On his TikTok account, Addison, whose username is @addison.foskey, documented how he would decorate his entire home with pride flags. In one video, he noted that he was changing up his lawn in response to someone tampering with the flag and sign on his property.

“To the person who stole our human rights sign and tore up our pride flag, I got two words for you: “wait, watch,” he said.

“If one flag bothered you that much, you are going to hate me after this,” he added.

In the caption, Addison emphasized his plan to plaster his home with pride flags, as he wrote: “Gonna be able to see our house from SPACE!!!”

As of 20 June, the clip has more than 2.9m views and even prompted some TikTok users to offer to send him flags. Addison later noted that he already had 103 flags coming in via Amazon.

“Several years ago, someone vandalised a gay couple’s house, and flag. Our town has been a sea of ​​rainbows ever since,” one wrote.

“These kinds of people will never know what peace and love is… But anyways you’re gonna show em,” another added.

A third user added: “Sorry man nobody has the right to destroy other people’s property, I’m a straight man and this is wrong, I respect everyone.”

In a followup video, he emphasized how someone tearing his flag encouraged him to buy even more items with a rainbow design on it.

Over the weekend, he shared a video of his entire lawn filled with not only small rainbow flags, but also a few transgender, asexual and lesbian flags.

Addison’s lawn also had multiple Progress pride flags, which have the six-striped rainbow design and brown and black stripes from the Philly flag, created in 2017 to highlight the inclusion of black and indengenious people in the queer community. The Progress flag also features white, blue, and pink stripes on it, from the transgender flag. He had also tied a rainbow-coloured banner in between two trees.

Addison even put some of his TikTok Live viewers’ names on the flags. In the comments, many TikTok users praised him for including them in his project as it happened.

“THANK U SO MUCH FOR THIS!! ALSO THANK YOU FOR PUTTING ME IN A TRANS FLAG!! I LOVE U,” one wrote.

“I love this!!! Thank you thank you again for making one for my daughter Rynn,” another added.

Meghan Markle fails to inspire Americans, her popularity plummets in US: report

5 Mouth-Watering Delicacies that you Should Devour When in Slovenia

Meghan Markle fails to inspire Americans, her popularity plummets in US: report

5 Mouth-Watering Delicacies that you Should Devour When in Slovenia