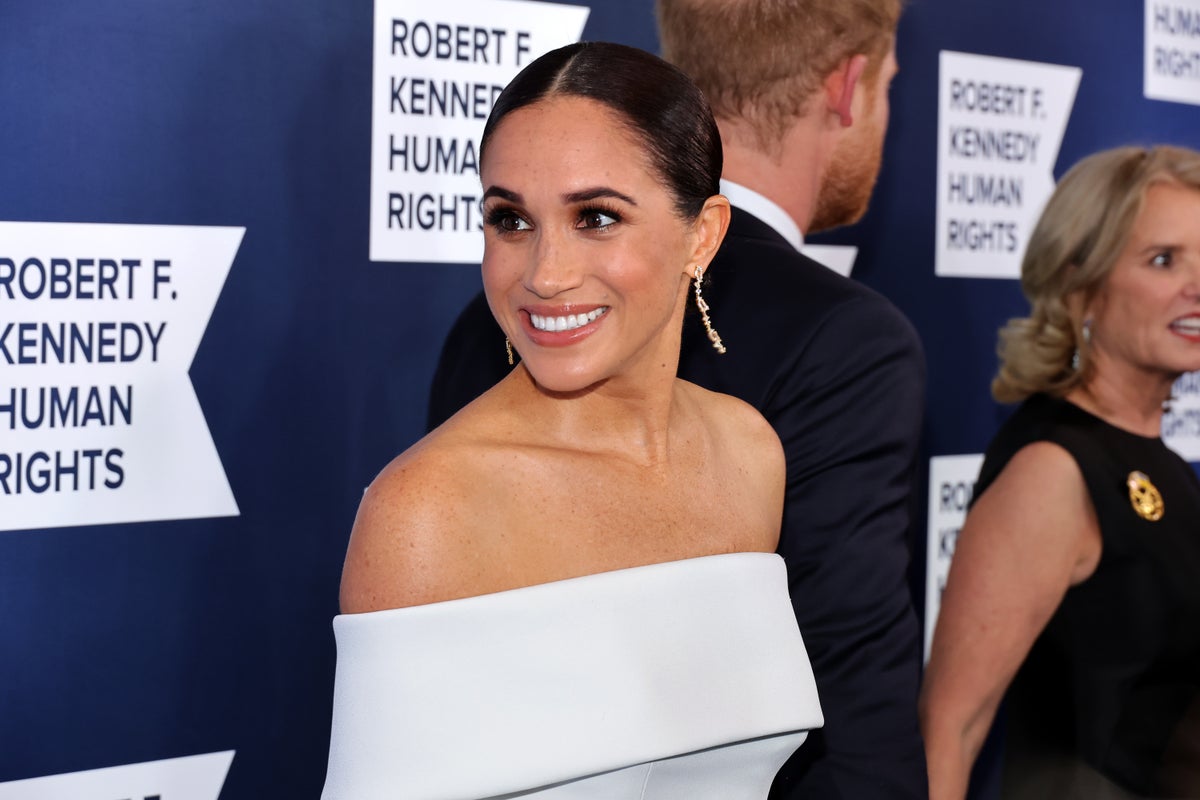 The fashion magazine says it is the first time Meghan has worn the French label at a high-profile public event. Meghan also wore an aquamarine ring from Princess Diana’s personal collection, which she also wore on her wedding day.

The Duke and Duchess of Sussex, who traveled via private jet from their home in California, were seen arriving in the city on Monday ahead of the awards.

They were honored at the Manhattan gala alongside Ukrainian President Volodymyr Zelensky and late NBA star Bill Russell for their work “to protect and advance equity, justice, and human rights”.

Follow along with the latest updates on Meghan and Harry’s trip to New York City below.

The use of the images and clips was meant to highlight the couple’s points regarding their time as senior royals, with Prince Harry claiming in the trailer that Meghan was caught in a “feeding frenzy”.

“There’s a hierarchy of the family,” he says in the trailer, which was released on 5 December, before adding: “You know, there’s leaking, but there’s also planting of stories.

“The pain and suffering of women marrying into this institution, this feeding frenzy.”

You can find the full trailer for the upcoming docuseries below.

Meghan wears off the shoulder dress by Louis Vuitton

according to Vogue Meghan Markle chose a custom white off-the-shoulder dress by Nicolas Ghesquière for Louis Vuitton. The fashion magazine says it is the first time Meghan has worn the French label at a high-profile public event. Meghan also wore an aquamarine ring from Princess Diana’s personal collection, which she also wore on her wedding day.

“I was kind of shocked for them to come here and do this,” the actor said at the Ripple of Hope gala blue carpet.

“To handle difficult circumstances in the press without having too much difficulty. There’s always going to be certain difficulties.”

Baldwin joked that he might become “their driver” and praised them for having “chosen a different path.”

“They’re newly arrived in the states. They haven’t been here that long. I think it’s great that they have agreed to support this cause which we’ve supported for years.”

The trailer also included a shot of Meghan and Harry photographed from above during their visit to Archbishop Tutu’s residence in Cape Town.

However, after the release of the trailer, Robert Jobson, the royal editor of the Evening Standard, claimed that the photo was not taken without the couple’s consent.

“This photograph used by Netflix and Harry and Meghan to suggest intrusion by the press is a complete travesty,” he wrote on Twitter.

Harry and Meghan at the New York gala

harry and meghan arrive at gala in new york

The duke and duchess have also faced criticism over the trailer for their upcoming Netflix documentary, after fans noticed that many of the photos used appeared to be taken at events where Harry and Meghan were not present.

The Duke and Duchess will be honored at the gala for their “unwavering commitment to social change.”

Amber Raiken has the story.