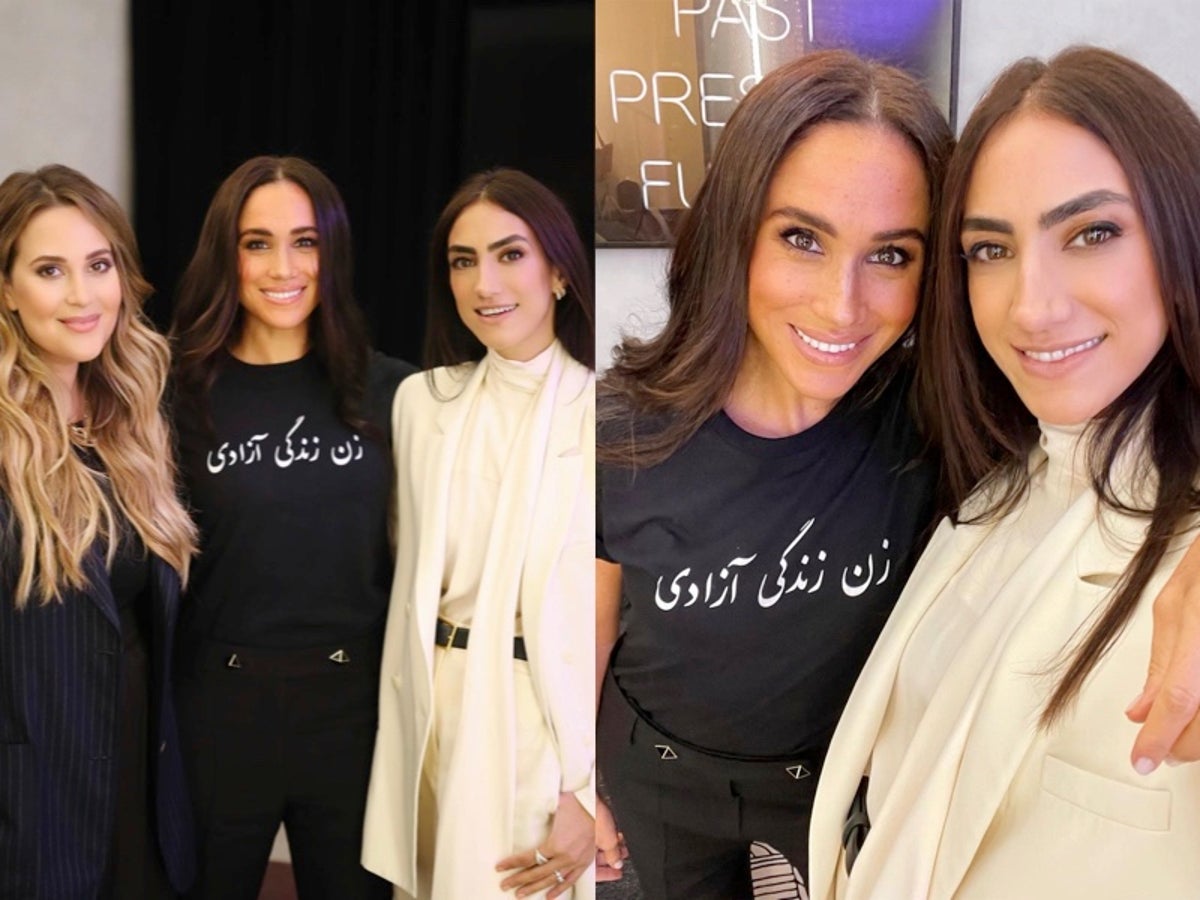 The Duchess of Sussex is standing in solidarity with the women and girls protesting in Iran by wearing a black T-shirt with the words “Women, Life, Freedom” written in Farsi.

Meghan Markle showed her support for the female protesters on Tuesday when she wore the top to the Women@Spotify event in Los Angeles, California. The 41-year-old attended the event alongside Archewell president, Mandana Dayani, and executive vice president of global communications, Ashley Momtaheni, who are both Iranian.

Taking to Instagram on Tuesday, Dayani shared how Markle spoke about the “courage and bravery” being shown by protestors in Iran, as women and young girls fight for their basic human rights. Dayani also posted two pictures of herself alongside the duchess, whose black slogan T-shirt was on full display.

“At an event today, Meghan spoke about the revolution being led by women and young girls in Iran, the courage and bravery they show every day, and their leadership and advocacy of basic human rights: women, life, freedom,” she captioned the post. “As an Iranian woman who fled her home country in pursuit of these very freedoms, I could not have been more grateful for how she chooses, again and again, to advocate for women around the world. Proud day at Archewell, and especially for me and Ashley Momtaheni.”

The Archewell Foundation president also praised Markle for being an ally to the movement, adding that she is “so grateful to work with incredible women like Meghan and my fellow Iranian colleague and friend, Ashley Momtaheni, as we continue to highlight the bravery and courage of the women and young girls on the frontlines of one of the most important feminist movements of our lives.”

The duchess’ public display of solidarity comes after the death of 22-year-old Mahsa Amini, who died in police custody in mid-September. Mahsa Amini was arrested by Iran’s “morality police” for allegedly infringing on the country’s strict dress code.

Amini’s family has claimed she was beaten in custody, while a state coroner maintains that she died due to pre-existing medical conditions. Since her funeral, which took place one day after her death, protests have erupted across Iran.

Celebrities such as Angelina Jolie, Kim Kardashian, Bella Hadid, and Justin Bieber have also taken to social media to share Amini’s story and show their support for the protests in Iran.

In an Instagram post, the Jolie shared several photographs of women protesting on the streets and cutting their hair. The final slide in her post featured text, which read: “Protests in Iran are in their 12th consecutive night. They started in response to the death of 22-year-old Mahsa Amini while in morality police custody.

“Since the protests began, riot police have attacked protestors with brutal force, and more than 70 people have reportedly been killed.”

In her caption, the maleficent star wrote: “Respect to the brave, defiant, fearless women of Iran. All those who have survived and resisted for decades, those taking to the streets today, and Mahsa Amini and all young Iranians like her.”

She continued: “Women don’t need their morals policed, their minds re-educated, or their bodies controlled. They need freedom to live and breathe without violence or threats. To the women of Iran, we see you.”