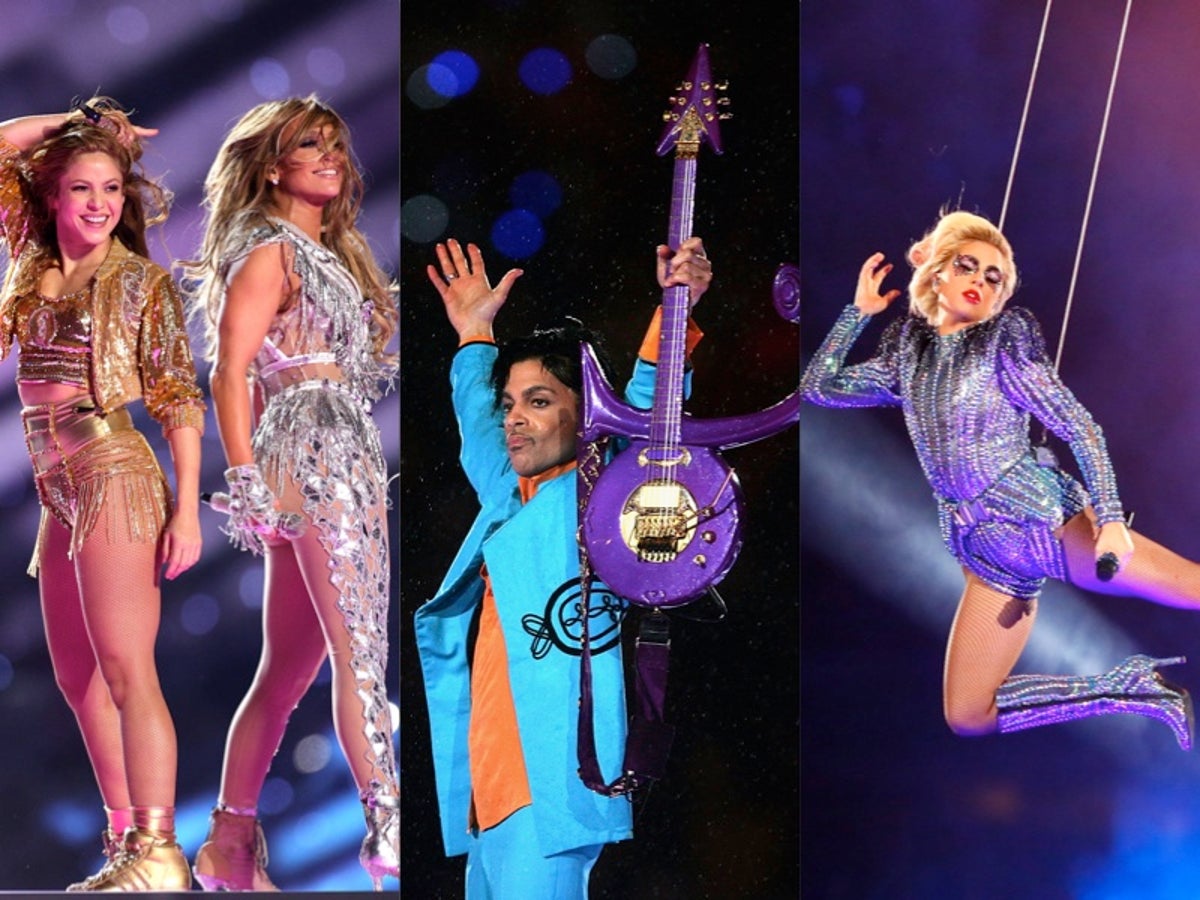 The Super Bowl game may be football’s biggest night of the year, but it’s the halftime show that has some of fashion’s most show-stopping moments.

This year, Grammy award-winner Rihanna will grace the halftime show stage (or football field) and join the ranks of fellow pop stars such as Lady Gaga, Beyonce, and Madonna who have all brought down the house before her.

If there’s one thing we know about the singer turned fashion mogul, Rihanna’s halftime show is bound to be full of midriff-baring looks, Swarovski crystals, and of course, lingerie.

From Katy Perry’s four outfit changes to Madonna’s Cleopatra-inspired ensemble, here’s some of the best fashion moments from Super Bowl halftime shows of years past.

In 2021, The Weeknd brought the Las Vegas strip to his Super Bowl halftime show. The “Blinding Lights” singer took the stage wearing a custom black and red suit designed by Givenchy’s Matthew Williams that reportedly took over 250 hours to make.

Then, J-Lo stepped out in an all-black leather look designed by Atelier Versace, before changing into a jewel-encrusted bodysuit also made by the Italian fashion house. To close the show, the two women appeared on stage together wearing complimenting metallic outfits.

During her 2017 performance, not only did Lady Gaga begin her set by jumping off the roof of the NRG Stadium, but she also changed her outfit three times.

For her death-defying stunt, the “Born This Way” singer wore a Versace bodysuit adorned with Swarovski crystals, with matching knee-high boots. She then threw on a golden jacket with spikes to play the keytar, before changing into a football-inspired top complete with shoulder pads and micro pants.

In 2015, Katy Perry made history with perhaps the most elaborate Super Bowl performance ever. The “Firework” singer began her halftime show by entering on an animatronic mechanical lion while wearing a fiery two-piece set by Jeremy Scott.

Perry ultimately achieved a total of four outfit changes — from a 1950s-inspired multi-colored mini dress, to a zip-up hoodie, to a silver floor-length gown with stars printed on it. And of course, who could forget Left Shark.

While both pop stars each had their turn at headlining the Super Bowl halftime show, it was their surprise appearances at Coldplay’s halftime show that took the (fashion) cake.

Bruno Mars and Beyoncé were special guests at Coldplay’s halftime show in 2016. For his surprise performance, the “Uptown Funk” singer took cues from 1980’s era hip-hop style when he and his 11-piece band coordinated in Versace black leather costumes.

Mars was dressed in slouchy trousers and a black jacket, which featured gold buttons and cuffs emblazoned with Versace’s signature Greek motif. She paired the leather look with gold chains and Nike sneakers.

Speaking of the King of Pop, Michael Jackson’s 1993 halftime show look has gone down in fashion history. The “Thriller” singer appeared on stage wearing a military-style black jacket and aviator sunglasses. He then removed the jacket to reveal a white T-shirt and billowing white jacket.

In 2007, Prince performed at the Super Bowl halftime show in a turquoise suit, orange shirt, and his iconic purple guitar in a downpour no less.

Madonna possibly broke the record for most surprise appearances in one halftime show when she brought out LMFAO, Nicki Minaj, MIA, and Cee Lo Green at the 2012 Super Bowl. But even MIA’s middle finger moment couldn’t upstage Madonna’s three outfit changes.

All three looks worn by Madonna were designed by Ricardo Tisci for Givenchy haute couture. At the start of her performance, the “Like a Virgin” singer emerged in a gold cape embroidered with sequins, studs, and crystals, lined in leopard-print chiffon. She completed the first look with a gold headpiece from Phillip Treacy.

Madonna then changed into another Givenchy mini-dress look with a studded belt, short cape, and custom Miu Miu thigh-high black-and-gold boots. She finished her performance with a floor-length Givenchy embellished black coat.

Before Katy Perry’s four outfit changes, there was Diana Ross. The songstress also achieved a total of four outfit changes during her 12-minute performance at the 1996 Super Bowl halftime show. The “Upside Down” singer began the show wearing a red sequin mini dress, and then changed into a flowing orange and purple gown.

During her third outfit change, while belting “Ain’t No Mountain High Enough”, she swapped her floor-length gown for a gold cape. Finally, the diva closed out her set wearing a purple embroidered cat suit.

The country music star took the Super Bowl halftime show stage in 2003 wearing a bedazzled bra, black mini skirt, and a full-body cape that was cinched at the waist.

While the Black Eyed Peas’ performance at the 2011 Super Bowl isn’t the most well-received halftime show, the foursome still pulled out all the stops when it came to their flashy, glow-in-the-dark costumes with flickering LEDs, like something out of Tron: Legacy,

Who can forget the Super Bowl halftime show to end all halftime shows? Jackson donned a leather studded corset from Alexander McQueen during her 2004 Super Bowl performance with Justin Timberlake. However, Jackson’s fashion moment was overshadowed when Timberlake tore off the front of her costume and accidentally exposed her breast, forever launching “nipplegate”. Justice for Janet.