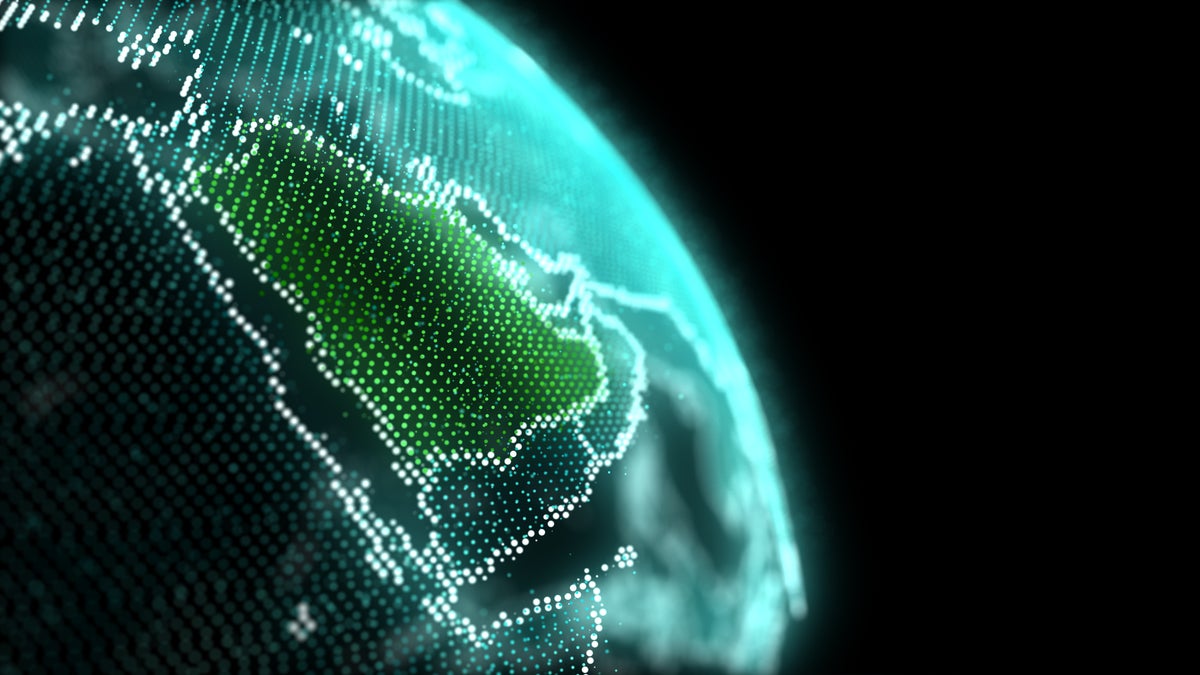 Saudi Delegation to WEF is a Business Reporter client

When we think of the future and technological advancements, perceptions are often shaped by movies and TV shows. Visions of conversational robots, flying cars and entire populations clad in silver jumpsuits are the classic stereotypes. Four-wheeled AI-powered robots ushering visitors through Riyadh airport and welcoming them to Saudi Arabia in dozens of different languages ​​is perhaps a less often imagined future at this stage.

But such technological capabilities are becoming a reality in the kingdom – as visible a symbol of the ongoing technological and digital transformation underway as any in the world today.

As part of the Saudi government’s Vision 2030 initiative, which aims to diversify the economy and boost the contribution of the private sector to national GDP, the development of localized Fourth Industrial Revolution (4IR) solutions will propel the kingdom’s shift towards an innovation-driven, knowledge-based economy.

So far, the plan seems to be working.Saudi Arabia’s digital sector is valued at around $40 billioncomprising318,000 jobs and making it one of the largest in the region. And with further projected investmentsof $24.7 billion set for various technologies by 2025it’s among the highest government expenditure on technology in the world.

In return, major global technological players such as Google, Alibaba, Oracle and SAP, are investing in the kingdom, which is helping to foster the growth of homegrown tech-based companies while creating jobs and experience in the Saudi market.

It all leads to some impressive figures and remarkable global progress.Saudi Arabia’s internet penetration rate stood at 98 per centfrom a population of 36 million, at the start of 2022.

The kingdom was also ranked second globally among G20 countries in the 2021 Digital Competitiveness Report; second in the world on the 2022 Global Cybersecurity Index; third globally for its digital government transformation by the World Bank’s GovTech Maturity; and first in the Arab world, and 22nd globally, in the latest Global Artificial Intelligence Index.

With Saudi Arabia’s location between Africa, Asia and Europe, it also acts as a strategic logistics center for the movement of data between key gateway markets.

The digital transformation taking place in Saudi Arabia is being spurred by strategic funding. The Digital Government Authority is leading the change here, with plans for smart cities, digital healthcare initiatives, improved infrastructure and autonomous transport, blockchain technology for money transfers, and anThe e-commerce market is expected to soar in value to more than $13 billion by 2025. It is also part of a movement, along with the Communications, Space and Technology Commission, that is urging companies to adopt more IoT solutions for their business.

Much of the funding is allocated from the Vision 2030 National Investment Strategy, and has so far led to the digitization of government services, the launch of a digital academy, a national IT academy, and a variety of funds and support packages.

In 2021, the government announced a series of programs worth $1.2 billion to improve the digital skills of 100,000 Saudi students by 2030., with a focus on cyber-security, programming and e-gaming. At the same time, it announced $1.4 billion to support start-ups, with an initiative called Garage, working with such stakeholders as the King Abdulaziz City for Science and Technology, investing in early-stage businesses.

International companies includingGoogle has invested $2.5 billion in cloud technology in the kingdomand are also working to educate the nation’s youth with the launch of the Google for Startups technology hub and the Cisco Networking Academy.

Tech start-up boom in the kingdom

With such a wide range of support, Saudi Arabia’s growing tech market already has its own share of success stories and a number of start-ups showing great promise.Tamara, a buy-now-pay-later fintech start-up, recently raised $100 million in a Series B equity round led by venture capital firm Sanabil Investments, a company owned by the kingdom’s Public Investment Fund. Founded in 2020, it has partnered with recognized global brands such as Ikea and Adidas, with more than three million customers, and 10x year-on-year revenue growth.

Qawafel provides a market data service to support small factories in creating and innovating new products. So far, it has assisted more than 300 local factories, leading to an increase in their average rate of orders.

The digital transformation is already benefiting Saudi Arabia’s economy. The digitalisation of vital sectors comprises more than 50 per cent of the nation’s GDP, including energy, finance and government services, and is boosting productivity and efficiencies while reducing the risk of human error.

Embracing technology and the digital economy ahead of other countries, and a focus on building agile regulation that supports emerging sectors, also makes Saudi Arabia more appealing in an uncertain global landscape.

And it presents opportunities to its growing female labor workforce – which rose from 15 percent of the total workforce in 2018 to 35.6 percent in 2022. The first Apple Developer Academy in the Middle East, in Riyadh, for example, is offering women the chance to become programmers and developers, teaching coding, design, entrepreneurship and more.

But in such a rapidly expanding market, steps need to be taken to ensure that a sufficient workforce is available, with a robust pipeline of talent equipped and ready to bring digital native skill sets and an innovative, problem-solving mindset to future jobs. Tailored training programmes, and enough of them, will be needed to nurture the relevant skills.