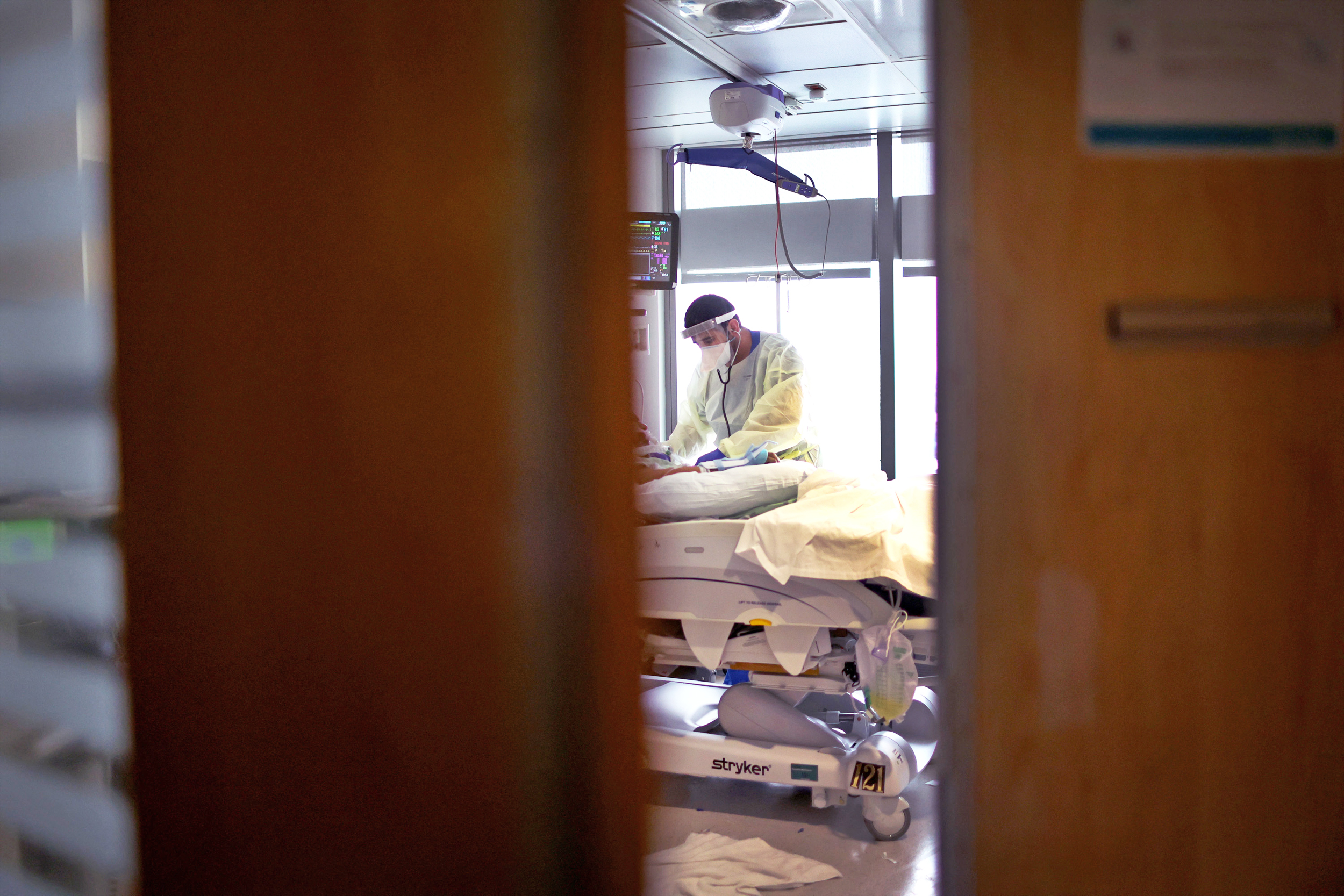 Every inpatient bed at Comer Children’s Hospital in Chicago has been full for more than six weeks. Emergency room volume is up more than 150%.

The flow of patients is like “a treadmill that never ends,” said Dr. Allison Bartlett, a pediatric infectious diseases specialist at Comer Children’s. As soon as a child is discharged, their bed fills up with the next kid in need.

Yet the hospital is simultaneously fielding a barrage of requests to accept new patients from facilities that don’t treat children or are overrun themselves.

“It’s scary. It makes me worry about my kids getting in a car accident and not having a place to go,” Bartlett said.

Many of the patients at Comer Children’s have RSV, or respiratory syncytial virus, which can cause lung infections. But doctors are also seeing cases of rhinovirus, enterovirus, adenovirus and several coronaviruses, including Covid.

Because of this fall surge of respiratory viruses among children, around three-quarters of pediatric hospital beds nationwide are now full, according to data from the Department of Health and Human Services.

That is forcing hospitals around the country to resort to the contingency plans reserved for such crises: They are sending sick kids to other states to receive care or are making space in other wards, like specialty units or postoperative recovery areas. Some hospitals are sending ICU patients directly home once their cases are no longer acute, rather than to another floor. And many on-call nurses are working extra hours.

NBC News spoke with nine doctors across eight states — California, Colorado, Illinois, Maryland, Ohio, Texas, Rhode Island and Washington — about the measures their hospitals have taken to handle this convergence of viruses.

“Everywhere is overcrowded, overrun and understaffed, and having a really difficult time dealing with both unprecedented numbers of cases but also an off-season timing,” said Dr. Michael Koster, director of pediatric infectious diseases at Hasbro Children’s Hospital in Providence, Rhode Island.

Koster said his hospital is sending patients to Connecticut, Massachusetts and New Hampshire. But at the same time, he added, “we’ve had calls for transports for respiratory viral illness from Puerto Rico up to Maine.”

The surge has caught doctors off guard, since cases of RSV and other respiratory viruses usually peak in winter. RSV cases this year started climbing in the summer. The weekly number of positive tests rose more than fivefold from Aug. 13 to Oct. 15, according to the Centers for Disease Control and Prevention.

Doctors said masking and social distancing likely prevented kids from getting exposed to respiratory viruses earlier in the pandemic. Then kids began to encounter new pathogens for the first time, with little immune protection.

RSV, now the dominant virus in many hospitals, often looks like a common cold. But in severe cases it can lead to pneumonia or bronchiolitis, an infection in the airways. Such patients may need supplemental oxygen or ventilators to breathe. Infants and children with lung diseases or weakened immune systems are most at risk.

Koster said his hospital freed up additional beds in a suite where patients are usually seen for procedures requiring sedation.

“We push those patients out into essentially the radiology hallway where ultrasounds are happening and take over spaces like that for the emergency department,” he said.

Dr. Jason Custer, chief of critical care at the University of Maryland Children’s Hospital, said critical patients in his state often wait up to 36 hours to be moved to an ICU. His hospital’s ICU has been at full capacity for the better part of the month, he said.

Patients ready to be transferred out of the ICU are sometimes discharged rather than moved to other parts of the hospital, Custer added.

“Instead of sending them to the next level of care, we just say, ‘Looks like you’re good enough to go home and we want you to follow up with your pediatrician tomorrow,'” he said. (He clarified, though, that the hospital hasn’t changed its criteria for discharging patients.)

Koster, similarly, said he is showing parents how to perform suctioning — a process of removing mucus from the nasal passages with a tube or syringe — at home to ensure their child can eat and drink. Sometimes, that difficulty is the main reason kids stay in the hospital.

“We’ve had to adapt to making sure we’re meeting the needs of the most sick and then really doing our best to provide the right supportive care for kids who can go home,” Koster said.

But suctioning can be tricky for parents, according to Dr. Elizabeth Schlaudecker, an infectious disease specialist at Cincinnati Children’s Hospital.

“When my kids got old enough to recognize what that suction bulb looked like, they would make it as hard as possible to suction out their noses,” she said. “It can be exhausting for family members to have to do that all by themselves.”

Hospitals are still bracing for an expected wave of flu cases that is just beginning.

“If we get influenza on top of RSV, that is going to put another significant strain on the system,” Messacar said. “If we can get as many people vaccinated as possible and protect as many kids as possible to try to help with the burden as we’re getting through RSV season, that would be welcome news for all of us in pediatric medicine.”

Hazard ready to take Belgium all the way in Qatar