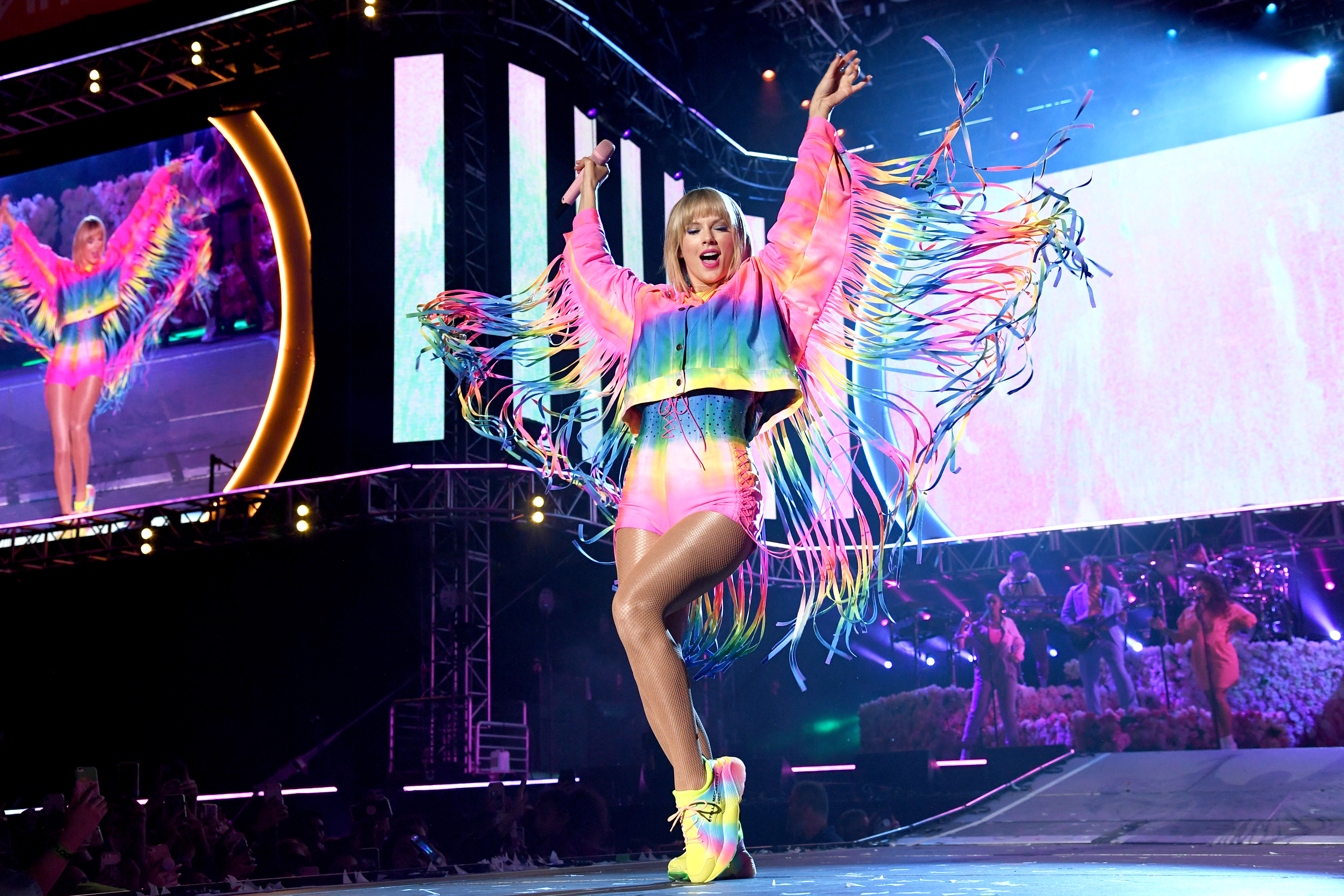 A group of Taylor Swift fans have flooded social media to dissect yet another theory about the artist that suggests one of her songs on the “Midnights” album is “queerbait.” But some experts say the allegations are just part of the larger fan fervor surrounding celebrities, which at times can go too far.

“Queerbaiting” is when straight people allude to being LGBTQ for their own gain without actually being members of the community. Speculation surrounding Swift’s sexuality has been on the internet since as early as 2012, but it wasn’t until her 2019 album, “Lover,” that social media erupted over a theory that she might be part of the LGBTQ community. The album included the allyship anthem “You Need to Calm Down,” which featured supportive lyrics like “‘Cause shade never made anybody less gay” and a music video with cameos by drag queens and queer celebrities. After the song’s release, the LGBTQ advocacy group GLAAD said it received an “influx” of donations.

The online obsession of some fans only intensified after the release of her albums “Folklore” and “Evermore” in 2020. Fans specifically honed in on the song “betty.”

Swift, who said she was “not a part of” the LGBTQ community in 2019, has been with her current partner, English actor Joe Alwyn, for six years. She also dated actor Tom Hiddleston, DJ Calvin Harris and performer Harry Styles.

Bogus fan theories have long been a part of stan culture — the fanbases that are ready to defend their favorite celebrities. But the mobilization around stars can sometimes cross the line, especially with the rise of subcommunities such as SwiftTok or r/GaylorSwift, a now private subreddit discussing theories around Swift’s sexuality. On TikTok, the hashtag “Gaylor” has more than 264 million views; the term refers to Swift fans who subscribe to the theory that she is queer. Some “Swifties,” or fans of Swift, have become convinced that she is either bisexual or a lesbian.

The artist is known for intentionally leaving clues of all kinds in her music videos and lyrics.

“It’s sort of a tradition that we started a very long time ago,” Swift told NBC’s “The Tonight Show” host Jimmy Fallon last November when discussing Easter eggs. “I think the first time that I started dropping sort of cryptic clues in my music was when I was 14 or 15, putting together my first album.”

For example, in the music video for “Look What You Made Me Do,” Swift said, she “started playing with doing nods to former musical eras I’ve been in my career and all kinds of weird stuff for them [the fans] to just go through the video and be like, ‘That over there, what’s that? Does this connect to that? What does that mean?'”

Prior to the release of “Midnights,” some fans who identify as Gaylors suggested the song title “Lavender Haze” could be one of her infamous Easter eggs or hidden messages.

Fans have gone down these rabbit holes before, speculating over other hints across Swift’s songs, music videos and social media posts. Previous Easter eggs discovered by fans include the album title for “Lover” hidden in the background of the music video for “Me!” ahead of the album title’s announcement. Another, which required fans to become sleuths, was when the name “William Bowery” appeared as a credit in two “Folklore” songs. Fans later discovered “Bowery” was a pen name for Alwyn.

As some on TikTok pointed out, lavender has been associated with the lesbian community for many years. On TikTok, the hashtag “#LavenderGate,” referring to rumors surrounding the song’s meaning, has nearly 1.1 million views.

While some continue to theorize that Swift will come out, others have expressed criticism that they believe she is “queerbaiting” by hinting at lavender, which Naminata Diabate, an associate professor at Cornell University who specializes in gender studies and new media, said has “become a symbol of queer resistance and empowerment.”

Visibility of terms such as ‘queerbaiting’ ‘#gate’ can make formulating these allegations an easy exercise without much thought. Given that the terms encapsulate a history, they become handy to deploy in situations that often don’t warrant them.”

“It’s not about her sexuality. I don’t care,” a TikTok user said in a video about #LavenderGate. “What I do care about is monetizing a marginalized community for her own capitalistic benefit and not actually upholding the allyship she claims to have.”

But, “the word queerbaiting, much like many pieces of language, have lost a lot of meaning because of Tumblr and TikTok,” said Brittany Spanos, a senior writer at Rolling Stone who taught a class about Swift at New York University.

Diabate said the list of celebrities accused of “queerbaiting “will get longer by the day, if not by the minute.”

“Founded or otherwise, these allegations and the behaviors, attitudes and images (posted pictures, clothing and makeup, and physical intimacy) that incite them have been proliferating for the last 2-3 years,” she said.

It’s important to note how the “visibility of terms such as ‘queerbaiting’ ‘#gate’ can make formulating these allegations an easy exercise without much thought,” Diabate said. “Given that the terms encapsulate a history, they become handy to deploy in situations that often don’t warrant them.”

In an Instagram Reel on Oct. 7, she said she came across the phrase “Lavender Haze” when she was watching the acclaimed show “Mad Men,” which is set in the 1960s and the 1970s.

“I looked it up, because I thought it sounded cool, and it turns out it’s a common phrase used in the ’50s where they would just describe being in love. Like, if you were in the lavender haze, then that meant that you were in that all-encompassing love glow, and I thought that was really beautiful.”

She said couples who are in that state of love will do anything to stay in it.

“I think a lot of people have to deal with this now … because we live in the era of social media,” Swift said. “And if the world finds out that you’re in love with somebody, they’re going to weigh in on it. Like my relationship for six years, we’ve had to dodge weird rumors, tabloid stuff, and we just ignore it. And so this song is sort of the act of ignoring that stuff to protect the real stuff.”

Accusations that Swift has co-opted queer aesthetics and culture as a marketing ploy have dogged her since as early as 2018, when she posted about her support for LGBTQ issues on Instagram.

In a 2019 interview with Vogue, she addressed why she made her support for the LGBTQ community more visible.

“Rights are being stripped from basically everyone who isn’t a straight white cisgender male,” Swift said. “I didn’t realize until recently that I could advocate for a community that I’m not a part of. It’s hard to know how to do that without being so fearful of making a mistake that you just freeze. Because my mistakes are very loud.”

Spanos suggested that the album “Lover” was just Swift’s way of “trying to show she really supports these fans.”

“She wasn’t saying on an album anything about dating anyone of the same gender. There was nothing there explicitly that was her baiting the idea that this is happening. But because there was a pride element to it, of course, the fans that want to grasp on to that are grasping on to it even harder.”

Spanos has an idea as to why the “rabidness over certain theories” surrounding Swift continues to permeate online. While Swift is active in engaging with her fan base, Spanos pointed out that she’s “deeply private” when it comes to her relationships, which are also “so deeply away from everything.”

“I think it’s opened up a lot of space for theories and ideas of what the songs could be about, what she’s going through, expectations for the album and things like that,” said Spanos, who is familiar with Gaylors and SwiftTok but said she stays away from the online discourse. “So that’s why, especially with lavender and its association with queer imagery and things like that, over the years I think people had a lot of assumptions that had already heightened in the absence of Taylor.”

But, sometimes, fanbase speculation can be detrimental to an artist.

“Social media platforms and the internet have created a culture of forced transparency and often unearned and unwitting belonging,” Diabate said. And “such a call for transparency and its ensuing accusatory framework may have the unintended result of stunting an artist’s creative genius and generating a culture of mistrust/distrust.”