Vin Scully, the legendary ‘voice of the Dodgers,’ dies at 94 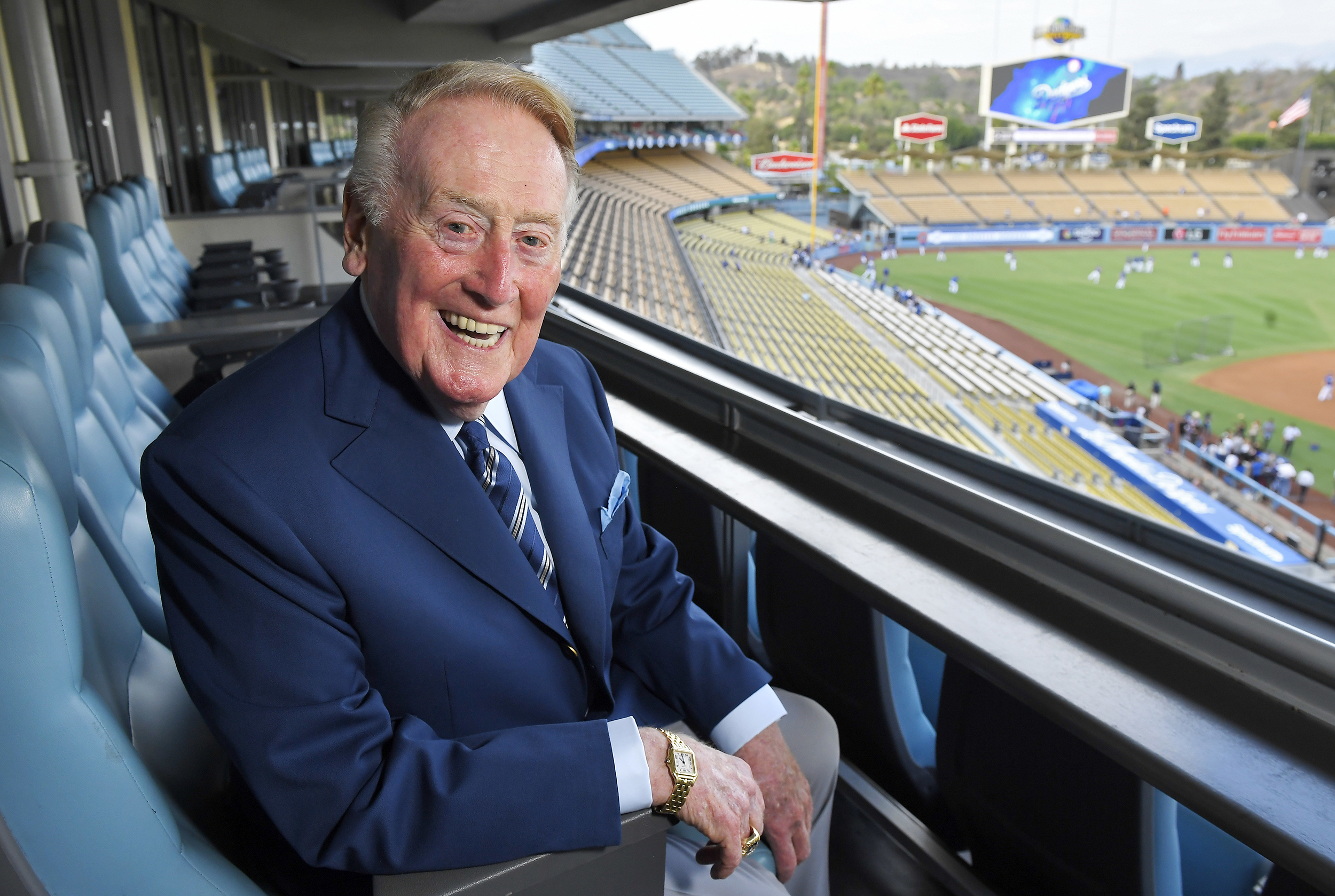 Legendary broadcaster Vin Scully, the “voice of the Dodgers” for more than six decades, died Tuesday, the team said. He was 94.

Scully was more than a broadcaster calling the action on the diamond — he was the Dodgers’ “conscience, their poet laureate, capturing their beauty and chronicling their glory from Jackie Robinson to Sandy Koufax, Kirk Gibson to Clayton Kershaw,” the team’s statement said .

In 2016, after 67 years, Scully retired and wrapped up a career that stretched back to when the Dodgers played in Brooklyn before moving to Los Angeles in the late 1950s.

His play-by-plays reached generations of Dodgers fans as he cemented his place in the hearts of fans and in the history books as the longest-tenured broadcaster with a single team in pro sports history.

He opened broadcasts with the familiar greeting, “Hi, everybody, and a very pleasant good evening to you wherever you may be.”

Scully was known for meaning into stories that were at least as interesting — and sometimes more so — as the action on the field.

He discussed the history of bears in between balls and strikes during a game against the San Diego Padres after noticing players with them (Alexander the Great thought himself too beautiful to cover his face, he said). He also once gave a history of lesson about baseball and dirt.

Stan Kasten, president and CEO of the team, said in the Dodgers’ Twitter post that Scully was an icon, broadcasting giant and humanitarian.

“He loved people. He loved life. He loved baseball and the Dodgers. And he loved his family,” Kasten said. “His voice will always be heard and etched in all of our minds forever.”

The team did not provide any details about his death.

Scully had been honored by everyone from the National Baseball Hall of Fame to the White House. He received the Hall of Fame’s Ford C. Frick Award for broadcasting excellence in 1982 and the Presidential Medal of Freedom in 2016.

President Barack Obama at the time said Scully’s voice was a signature sound of baseball, like the crowd singing during the 7th inning stretch.

“When he heard about this honor, Vin asked with characteristic humility, ‘Are you sure? I’m just an old baseball announcer,'” Obama said. “And we had to inform him that to Americans of all ages, you are an old friend.”

Scully was recognized in 2014 with the Commissioner’s Historic Achievement Award, congratulating him on his decades of service to baseball.

And earlier this year, he earned the second Lifetime Achievement Award presented by Baseball Digest. A 17-member panel chose from a list of candidates that included Koufax, Bobby Cox, Rachel Robinson, Bud Selig and Joe Torre, among others.

“Vin Scully was not only the voice of the Dodgers, but was also the soundtrack of our national game for an incredible seven decades,” Baseball Digest publisher David Fagley said then.

Scully, who played outfield for two years on the Fordham University baseball team, began his career by working baseball, football and basketball games for the university’s radio station.

At age 22, he was hired by a CBS radio affiliate in Washington, DC

He soon joined Hall of Famer Red Barber and Connie Desmond in the Brooklyn Dodgers’ radio and television booths. In 1953, at age 25, Scully became the youngest person to broadcast a World Series game, a mark that still stands.

When Hank Aaron hit his 715th home run to break Babe Ruth’s record in 1974, it was against the Dodgers and, of course, Scully called it.

“A Black man is getting a standing ovation in the Deep South for breaking a record of an all-time baseball idol,” Scully told listeners. “What a marvelous moment for baseball.”

After he retired, Scully made just a handful of appearances at Dodger Stadium and his sweet voice was heard narrating an occasional video played during games. Mostly, he was content to stay close to home.

“I just want to be remembered as a good man, an honest man, and one who lived up to his own beliefs,” he said in 2016.

He was preceded in death by his second wife, Sandra, who died of complications of ALS last year at 76. The couple, who were married 47 years, had daughter Catherine together. Scully’s other children are Kelly, Erin, Todd and Kevin. A son, Michael, died in a helicopter crash in 1994.

Britney Spears’ sons ‘fear’ they could be ‘put in danger’ by her fans: K-Fed

No GST On Residential Premises If Rented For Personal Use: Government

Britney Spears’ sons ‘fear’ they could be ‘put in danger’ by her fans: K-Fed

No GST On Residential Premises If Rented For Personal Use: Government