DENVER — A look at what’s happening around the New York Jets:

1. Trader Joe’s: The trade deadline is in nine days, which means general manager Joe Douglas is working the phones.

In three years on the job, Douglas hasn’t let a trade deadline pass without making a deal. The circumstances are different this year because, with a 4-2 record, the Jets are well-positioned to be flexible.

Naturally, the spotlight will focus on disgruntled wide receiver Elijah Moore, who has requested a trade. The Jets say trading him isnt an option. Even if they shopped him, it would be difficult to get equal value because his production still hasn’t matched his potential. The best course of action is to try to work through their differences with Moore, a 2021 second-round pick who is supposed to be one of their foundational players.

The Jets are willing to listen to offers for wide receiver Denzel Mims and cornerback Bryce Hall, both former 2020 draft picks who haven’t been able to get on the field. Mims was a healthy scratch in the first six games, but he will be active Sunday against the Denver Broncos. He will replace Moore, who was left in New Jersey to clear his head. Hall has played in one game but had just five snaps on defence. He has starting experience, so he could attract some interest.

Both players are signed through 2023, so there’s no urgency to send them packing for what would be a small return — we’re talking about a late-round draft pick, possibly even in 2024. At the end of the preseason, the Jets were seeking a fourth-round pick for Mims after he requested a trade, according to a source with direct knowledge of the situation. They won’t get that much, not even close.

On Thursday, Mims told ESPN his trade request is “still on the table,” but a trade seems more unlikely than ever because of the uncertainty surrounding Moore. Mims could be valuable insurance.

Could the Jets trade for a player? There are no glaring holes on the roster, but Douglas — unlike previous years — is more apt to be aggressive because of the team’s position in the standings. They could use some depth at safety and linebacker.

Douglas loves to deal at the deadline. In search of draft capital, he traded Leonard Williams in 2019, followed by Steve McLendon, Avery Williamson and Jordan Willis in 2020. In 2021, he imported Laurent Duvernay-Tardiff, who wound up starting.

2. Moore and less: Moore has been targeted on 13% of his routes run this season, according to ESPN Stats & Information. That ranks 78th out of 81 qualified wide receivers. With Zach Wilson at quarterback, he’s been targeted even less (11%). Moore’s frustration is understandable, but he needs to understand it’s a team game — and the team is winning for a change. In other words, his timing stinks.

3. Repairing the relationship: Moore’s trade request doesn’t mean he has no long-term future with the Jets. Things change quickly in the NFL. Coach Robert Saleh saw it happen with his previous team, the San Francisco 49ers, who escaped a thorny situation with wide receiver Deebo Samuel.

Instead of honoring Samuel’s offseason trade request, the 49ers remained patient and repaired the relationship. Saleh hopes to do the same with Moore. One difference: The 49ers pacified Samuel with a three-year, $72 million contract extension. Moore isn’t eligible for a new deal until 2024, so Saleh will have to do it the old-fashioned way: A little pep talk, with some ego stroking. 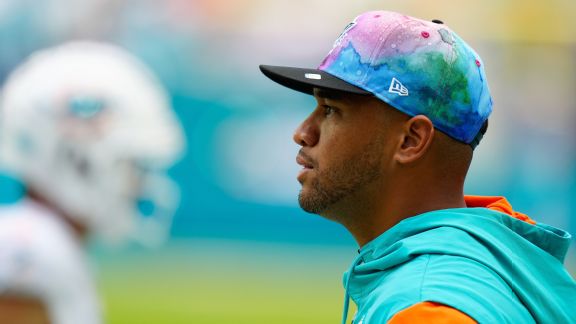 • What to know about Tua’s return
• Fixing the Bears’ offense
• Do Bills need to make a move?
• Surtain and Sauce lead the way
• Inside Kyle Pitts’ evolution

4. Team guy: Moore and running back Michael Carter find themselves in similar situations — second-year players who have lost opportunities due to the emergence of a rookie. In Carter’s case, it’s Breece Hall, who started for the first time last week. For Moore, it’s Garrett Wilson. Moore chose to express his apparent frustration on social media — a precursor to his trade request. Carter has kept quiet, refuting to make waves.

“I think it would be insecure for me to feel any type of way about it,” said Carter, the team’s rushing rusher in 2021. “The main thing is, I know I can [play] — I’m not stupid — but I’m happy he’s getting his opportunities, just because he deserves it and he works hard. I love seeing my teammates ball.”

This is why Carter is one of the most respected leaders on the team — the “heartbeat” of the offense, as offensive coordinator Mike LaFleur calls him.

5. Sauce lover: Saleh was sitting on the team just outside Lambeau Field last Sunday when he received a text from one of his former players, cornerback Richard Sherman. He sent a video clip of Sauce Gardner breaking up a pass to Green Bay Packers wide receiver Romeo Doubs, who tried to shake the rookie with a double move on a comeback route — and failed. The 6-foot-3 Gardner showed extraordinary agility, changing direction like a corner five inches shorter.

“I was like, ‘Damn, that was a really, really impressive play,'” Saleh said.

Sherman Garner gave Gard a shoutout on Twitter, another pass breakup from the game. Gardner appreciates the love from the former star.

Gardner is off to a sensational start. He’s one of only two players since 2000 to have a pass breakup in each of his first six career games. (The other is Desmond Trufant, 2013).

6. Have cheese, will travel: In case you’re wondering about the foam cheesehead that Gardner made famous in Green Bay, well, it made the trip back to New Jersey. It was a carry-on for him on the team flight, and it’s sitting at his home. He said he’s planning to display it.

7. Rookie growing pains: Not every member of the Jets’ vaunted draft class is flourishing.

Tight end Jeremy Ruckert (third round) has been a healthy scratch in two of the six games. He was replaced last week as the TE3 by Kenny Yeboah, who was elevated from the practice squad. It was a special teams-based decision, as the Jets typically don’t feature three tight ends in the offensive game plan. Ruckert missed the offseason because of a foot injury, but he’s had plenty of time to catch up.

As it turned out, Yeboah played a team-high 26 snaps on special teams. It was his rush that helped set up Michael Clemons’ blocked punt.

The fourth quarter says a lot about a team, from a talent, coaching and an intangible standpoint. It’s a far cry from last season, when they were minus-44 in the fourth (28th).

“We just have more firepower, more than anything,” Carter said.

9. Carbo loading: To prepare for Denver’s altitude, the Jets’ sports performance department created a nutrition plan so the players could prep for the change. It stressed heavy hydration and lots of carbs. Defensive end John Franklin-Myers, who said the Broncos have “the only true homefield advantage in the NFL,” said he ate a lot of pretzels and drank a lot of electrolytes.

10. The last word: “It’s crazy how that happens, man. Everybody was talking crazy about us, saying, ‘Same old Jets’ or whatever it is. Now they’re saying we have to stay humble, which we will.” , wide receiver Corey Davis on how the perception of the team has changed with winning